We cannot let the SCOTUS get their hands on this.

The Civil Rights Act of 1964, which ended segregation in public places and banned employment discrimination on the basis of race, color, religion, sex or national origin, is considered one of the crowning legislative achievements of the civil rights movement. First proposed by President John F. Kennedy, it survived strong opposition from southern members of Congress and was then signed into law by Kennedy’s successor, Lyndon B. Johnson. In subsequent years, Congress expanded the act and passed additional civil rights legislation such as the Voting Rights Act of 1965.

Following the Civil War, a trio of constitutional amendments abolished slavery (the 13 Amendment), made the formerly enslaved people citizens (14 Amendment) and gave all men the right to vote regardless of race (15 Amendment).

Nonetheless, many states—particularly in the South—used poll taxes, literacy tests and other measures to keep their African American citizens essentially disenfranchised. They also enforced strict segregation through “Jim Crow” laws and condoned violence from white supremacist groups like the Ku Klux Klan.

I wondered how was it that Roberts was able to speak at the opening of the Smithsonian’s National Museum of African American History & Culture. Well, I got my answer. 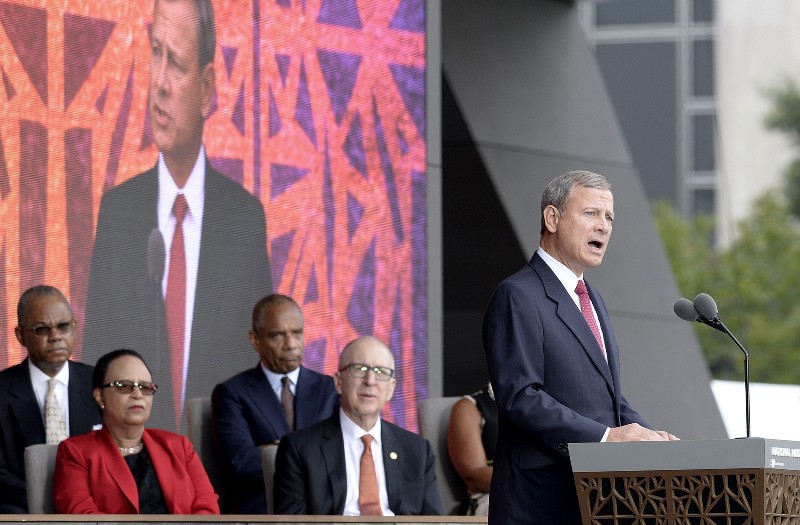 Seriously, what was he doing there?

Twenty-five years from now, it is likely that the Smithsonian’s National Museum of African American History & Culture will feature an exhibit where Chief Justice John Roberts is one of the primary villains. Roberts authored the Court’s 2013 decision gutting a major prong of the Voting Rights Act. Just last month, Roberts voted to reinstate North Carolina’s comprehensive voter suppression law, despite the fact that an appeals court found that this law was enacted for the very purpose of keeping black people from the polls.

The irony of Roberts’ speech at the Smithsonian’s newest museum is that it is likely that Roberts believes a publicly owned museum focused exclusively on the African American experience is unconstitutional. Roberts believes that the solution to racism is color-blindness, and that virtually any law that acknowledges the existence of race is somehow invidious. That’s why he wrote that two school districts’ plans to desegregate their public schools violated the Constitution. “The way to stop discrimination on the basis of race,” Roberts claimed, “is to stop discriminating on the basis of race.”