Lawsuits threaten against fox, newsmax and oam have stopped them from this lie!

My Pillow CEO Mike Lindell has seen his personal and corporate Twitter accounts suspended in the past week due to violating a disinformation standard regarding his repeated false claim that President Donald Trump won the November election.

He was shut down again Tuesday for propagating that conspiracy theory, but this time by a surprising source: Newsmax, the Trump-friendly, right-wing upstart cable network. After repeatedly trying to cut Lindell off as he perpetuated election falsehoods, Newsmax anchor Bob Sellers eventually gave up and, in a bizarre scene, got up and walked away from his anchor chair.

In December, both Newsmax and Fox News Channel aired segments shooting down election-fraud claims after two election-technology companies, Dominion Voting Systems and Smartmatic, raised the prospect of legal action over what they claim is false reporting about them. Dominion has since filed a $1.3 billion defamation suit against former Trump lawyer Sidney Powell. 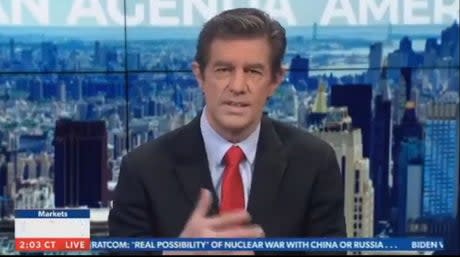 Newsmax anchor apologises to MyPillow CEO for storming out of interview

Let them fight against each other. Let them "Cancel" each other out.

He's back on that dope

Pillow man finally got what he was asking so loudly for:

Dominion Voting Systems, the election technology company that has been the focus of debunked conspiracy theories about election fraud, is suing MyPillow and its CEO Mike Lindell.

Dominion recently sued Trump's lawyer Rudy Giuliani and lawyer Sidney Powell for about the same amount each after they pushed similar lies about the US election and Dominion.