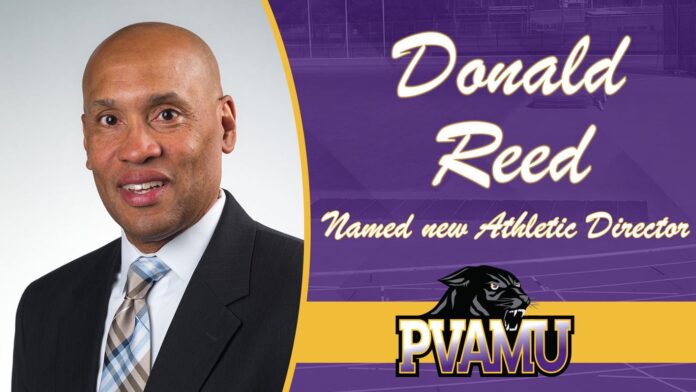 Under Reed’s leadership, Buffalo achieved a record 13 consecutive semesters of 97 percent of teams achieving a GPA above 3.0. Reed is also actively involved in the NCAA Legislative review process.

“Among a competitive field of candidates, Dr. Reed impressed the search committee with his record of accomplishments, breadth of experience, commitment to student-athletes, and managerial acumen,” Dr. Timothy Sams, Vice President for Student Affairs and search committee leader, said. “These attributes will greatly benefit our athletics program.”

Reed replaces Alicia Pete, who served as interim athletic director for PVAMU following the resignation of Fred Washington in August 2019. Upon Reed’s arrival, Pete will resume her roles as associate athletic director and senior woman administrator.

“Pete stepped in as interim athletic director and has ably led the department for the past eleven months,” PVAMU President Ruth Simmons said in a statement. “I am grateful for her willingness to step into the interim director role and her dedication to PVAMU and the athletic program.”

As athletic director, Reed will report to the President and serve as a member of the President’s Executive Leadership Team. He will be responsible for overseeing the strategic planning, fiscal affairs, staffing, fundraising and promotions, athletics facilities, intercollegiate athletics regulatory compliance, and general operations, along with the overall culture and management of the athletics department. He will also provide strategic leadership, direction, and oversight for the 18-sport National Collegiate Athletic Association (NCAA) Division I FCS intercollegiate athletics program, supervise a full and part-time staff, and manage a $17 million operating budget.

Reed will work closely with multiple internal and external constituencies to advance PVAMU’s strategic objectives and goals, representing the university to the NCAA and the Southwest Athletic Conference (SWAC).

Reed is expected to begin his duties on July 15.