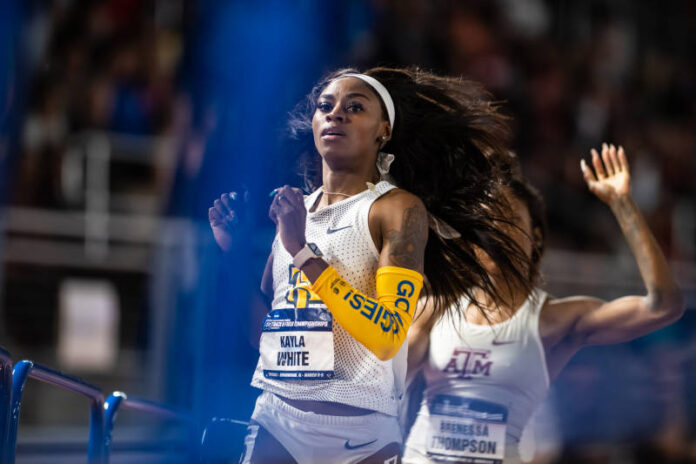 EAST GREENSBORO — North Carolina A&T track and field star Kayla White is one of 585 female college athletes who have been nominated by NCAA member schools for the 2019 NCAA Woman of the Year award. White is also one of six ladies from the Mid-Eastern Athletic Conference (MEAC) with an opportunity to be named NCAA Woman of the Year.

White had an incredible year for N.C. A&T Athletics. She ranked No. 1 in the nation in several events throughout the year and there were times during the season where she was No. 1 in the world. Her ascent began in February when she ran a 22.82 at the Tyson Invitational at the University of Arkansas to earn the No. 1 time in the world.


She later won the NCAA indoor national championship in the 200 m with a time of 22.66. White also finished second nationally in the 60-meter hurdles (7.92) missing winning the national championship by a lean. White qualified for the 60 meters as well but did not run the race so that she could concentrate on the other two races.

During the outdoor season, White earned a spot on the Bowerman Watch List, the highest track and field honor in collegiate athletics. White was also named Southeast Region Women’s Track Athlete of the Year during outdoor by USTFCCCA. At one point during the outdoor season, White had the No. 1 time in the nation in the 100 m (10.96) and 200 m (22.52) after running both times at the MEAC outdoor championships at N.C. A&T’s Irwin Belk Track. She won both races along with being one-fourth of the 4×100 meter relay team that took home MEAC gold.

Established in 1991, the NCAA Woman of the Year award recognizes graduating female college athletes who have exhausted their eligibility and distinguished themselves in academics, athletics, service, and leadership throughout their collegiate careers.

The NCAA encourages member schools to honor their top graduating female student-athletes each year by submitting their names for consideration for the Woman of the Year award.

Next, conferences will select up to two nominees each from the pool of school nominees. Then, the Woman of the Year selection committee, made up of representatives from the NCAA membership, will choose the Top 30 honorees — 10 from each division.

The selection committee will determine the top three honorees in each division from the Top 30 and announce the nine finalists in September. From those nine finalists, the NCAA Committee on Women’s Athletics then will choose the 2019 NCAA Woman of the Year.

The Top 30 honorees will be celebrated, and the 2019 NCAA Woman of the Year will be named at the annual award ceremony Oct. 20 in Indianapolis.