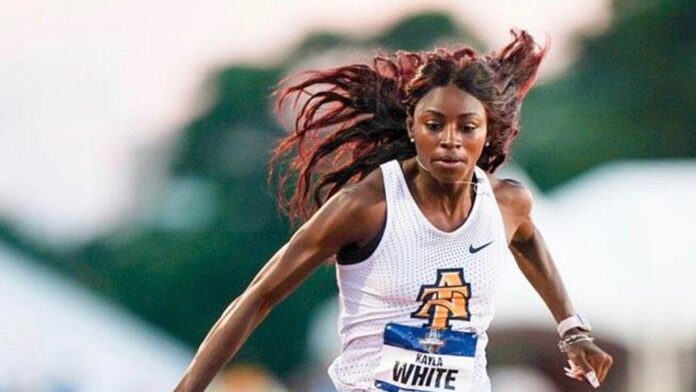 AUSTIN, Texas, — North Carolina A&T State senior Kayla White turned in another personal-best effort in the 100 meters at the 2019 NCAA Outdoor Track & Field Championships at Mike A. Myers Stadium on Saturday, but she had to settle for a runner-up finish.

White clocked in at 10.95 for her second sub-11 time of the season (she ran a 10.96 in winning the MEAC title in the event on May 4, which had been the top time in the nation heading into this weekend). But she finished second, as LSU’s Sha’Carri Richardson set a new collegiate record with a 10.75.


The finish gave the Aggies their second runner-up effort of the meet; Trevor Stewart came in second in the men’s 400 meters on Friday.

Norfolk State’s Kiara Grant was sixth in the 100 meters with a Spartan- and Jamaican-record 11.04.

In the women’s 200 meters, North Carolina A&T State freshman Cambrea Sturgis came in third after running a personal-best 22.40. White, who won the NCAA title at 200 meters during the indoor season, came in seventh with a 22.81.

The evening’s action started with the women’s 4×100-meter relay, in which North Carolina A&T State ran a 43.09 to come in sixth.