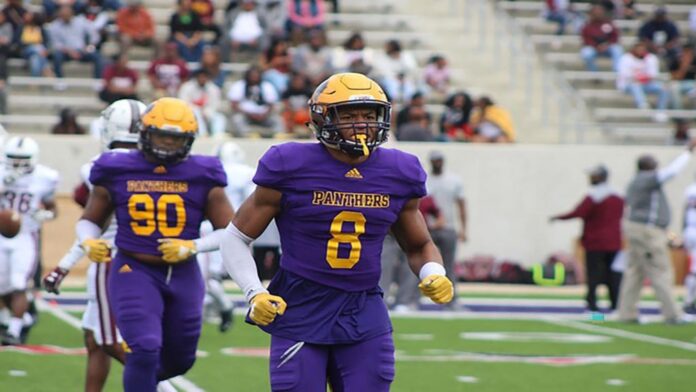 PRAIRIE VIEW, Texas — Prairie View A&M former defensive end football player Quinton Bell, became the first NFL draft pick for the Panthers since 1980, Saturday evening as he was picked 230th overall in the 7th round by the Oakland Raiders.

“I think this was big for Prairie View A&M University and the Southwestern Athletic Conference (SWAC),” said head PVAMU football coach Eric Dooley. “First of all I think it’s a blessing and there’s no question about that for this young man. He has worked so hard and this is what he has been working for. The first conversation I ever had with Quinton when I first came to Prairie View is that he wanted to change his position to play on the next level. When you talk about him getting drafted and his named being called on a big stage, such as ESPN I think it’s huge and he has accomplished what he asked for.”


“When you talk about what this means for Prairie View A&M University I can say many, many things, but I think it’s big for the University. It helps a whole lot and it helps this conference. He’s one of the two players that have been drafted out of this conference. I’m really lost for words, on how excited I am for this young man because this has still not hit me yet. I knew he was going to have an opportunity because of the type of pro day that he had and the magnitude of this draft. But again this is big for the University and big for this young man. I am thankful and happy for “Q” to have this opportunity,”

Bell began his first three years as a wide receiver, and during the 2015 season, he played in six games, catching two passes for 24 yards. In 2016 he played in 10 games with three starts, catching nine passes for 138 yards. Bell earned his first career touchdown, on a 47-yard touchdown against Rice on October 22nd. During the 2017 season, he caught eight passes for 97 yards, also earning a career-high of three receptions each for 29 yards.

In his senior season, Bell made the transition from wide receiver to defensive end, finishing the season with 14 solo tackles, 32 assists to finish his season with 46 tackles. Bell earned 7.5 Sacks for 38 yards to finish out his stint with the Panthers.

Bell became an intriguing prospect after his pro day where he was timed in the forty with a 4.38, vertical jump 41 inches, broad jump 11 feet and benched pressed 23.

Head Coach John Gruden with the Raiders called Bell to inform him that he would be the seventh round pick for the Oakland Raiders, “you really intrigued me out of all the guys in this draft I haven’t seen many guys that go from wide receiver to defensive end and run that fast … Congratulations you are officially drafted by the Oakland Raiders.”

When Bell received the initial call from coach Gruden his reaction was “It felt unreal to me, it feels like a dream to me right now. When I saw my name come across the screen and they were playing my highlights. Man! I really can’t put it into words how I am feeling right now. I just feel so blessed to have this opportunity. It really just doesn’t feel real. I am walking around my house and my family is going crazy out here, it’s just an unreal feeling over here!”

The last selection to the NFL draft from Prairie View A&M was Matthew Teague, who was chosen by the Dallas Cowboys in the 1980 draft. Teague was selected in the 10th round as the 273rd overall pick.