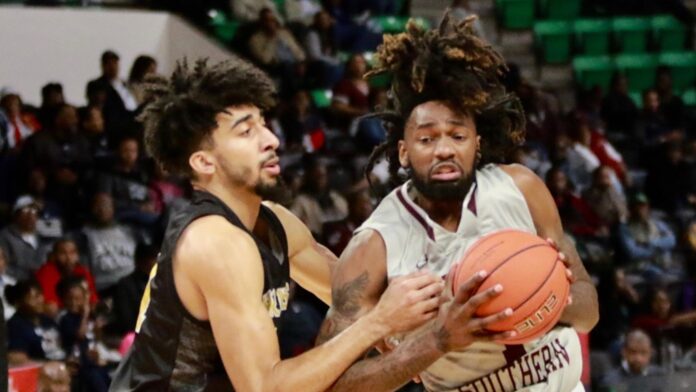 BIRMINGHAM, Ala. — Behind a huge game from 2018-19 Player of the Year Jeremy Combs, Texas Southern (21-12) advanced to the 2019 Toyota SWAC Basketball Tournament championship with an 80-66 victory over Alabama State Friday evening at Bill Harris Arena.

The Hornets (12-19) came out of the gate aggressively to open the game, as Leon Daniels keyed a 9-2 start to the contest for the No. 6 seed. The Tigers regrouped behind 2018-19 SWAC Player of the Year Jeremy Combs, who converted twice from close range to start a Texas Southern comeback.

Jalyn Patterson knocked down a three-pointer to give TSU its first lead of the game, and the sides traded baskets briefly before Combs again sparked a Texas Southern surge, scoring twice during an 11-3 run that pushed the Tigers’ lead to eight.

Texas Southern stayed ahead of the Hornets through the rest of the first half, and Combs opened the second half with seven points over the first 2:30 of the period, extending the Tigers’ advantage to 17.

Daniels knocked down a trey for Alabama State’s first points of the second half, but the Tigers maintained a double-digit advantage throughout the second half.

The Hornets made a late charge, getting the deficit down to seven with 1:30 left in the game thanks to a 6-0 run, but Jalyn Patterson converted a three-point play to push the Tigers’ advantage back to 10. Texas Southern cruised from there.

Interior scoring was a considerable factor for the Tigers, who scored 46 points in the paint on their way to the victory. Combs led with 28 points and 18 rebounds. Trayvon Reed added 15 points, Tyrik Armstrong added 11, and Patterson scored 10.