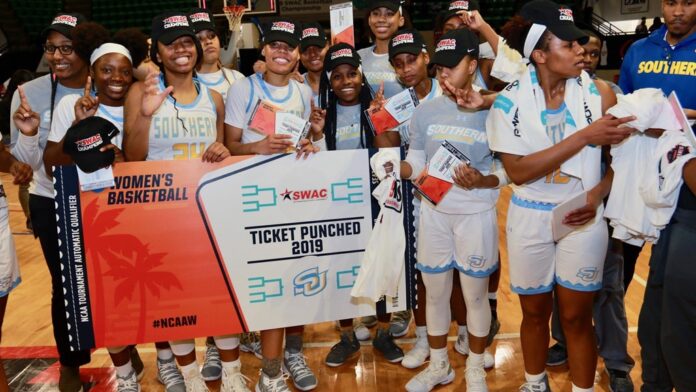 This is the first championship for Southern since 2019, and coach Carlos Funchess is the first coach since Cynthia Cooper-Dyke to guide a SWAC team to the tournament title in his or her first year on the sidelines.


A tight one from the opening tip, Christina Ellis carried the Jackson State offense early, matching Southern point for point on her own during the first quarter. In the second, the Jaguars turned things around behind back-to-back layups by Taneara Moore that brought them within two.

With Jackson State slogging through a five-minute drought without a field goal, Jaden Towner tied the game at 14 with a corner jumper. Kaisah Lucky broke the Lady Tigers’ cold snap with a shot, but Courtney Parsons snapped a three-minute scoreless streak for the Jaguars with a make of her own.

After a Marneisha Hamer layup rattled out, Parsons converted on the other end to put Southern ahead with 55 seconds left before the break. The Jaguars closed the half on a 6-0 run, taking a 20-16 lead into intermission.

Southern continued to stay a step ahead of Jackson State as the third quarter progressed thanks to the play of 2019 Tournament Most Valuable Player Alyric Scott, with the Jaguars cashing in on interior opportunities. However, Hamer refused to let the Lady Tigers fade, scoring 10 points in the frame.

An Ellis drive pulled Jackson State within three as the third quarter came to a close, and Hamer converted one of two free throws to inch the Lady Tigers closer with 7:41 left in the game. Hamer later knocked down a jumper to tie the game at 33 with 6:34 left.

Southern’s Skylar O’Bear knocked down a three to put the Jaguars up 36-33, and Taylor Lattimore cut the JSU deficit to one with a perfect trip to the line. Lucky followed suit to put Jackson State ahead, but Scott answered on the other end for Southern. Parsons drained a trey to increase the Jaguars’ lead to 41-37, but Hamer answered with a jumper to put the Lady Tigers back within one possession.

Scott again converted from close to make the contest 43-39 with 1:02 left, and though Ellis made a pair of free throws to bring JSU back within a basket, Brittany Rose found Rishonti Cowart alone on the other end, who cashed in on a point-blank layup to keep the Jaguars ahead, as Jackson State was unable to convert on several chances in the final seconds.