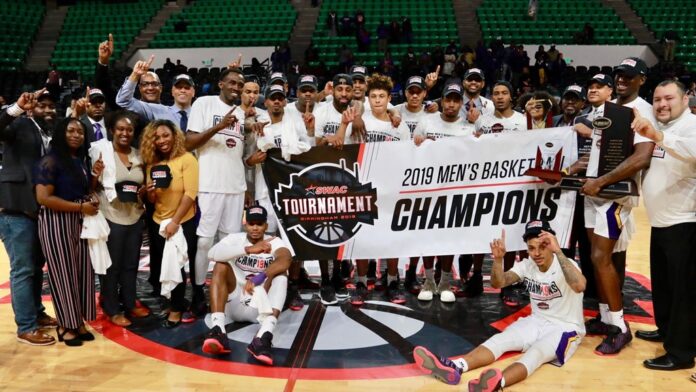 The win takes Coach Byron Smith and the Panthers to March Madness for the first time since 1998.


With Tyrik Armstrong having the hot hand early, Texas Southern rushed to a 13-4 advantage over the top-seeded Panthers.

The Tigers built a 20-7 lead following a Trayvon Reed dunk with a little over 13 minutes left, but Prairie View A&M fought back with an overwhelming 19-4 barrage over the next six minutes to take a 26-24 lead.

The cross-town rivals traded points until the Panthers pushed the pace late, with 2019 Toyota SWAC Basketball Tournament Most Valuable Player Gary Blackston converting consecutive buckets to give PVAMU a 41-35 lead. The Panthers kept the advantage the rest of the frame.

In the second half, it was Prairie View A&M that got off to the hot start, as a sudden 6-0 run pushed its lead to 51-41. Jalyn Patterson then got going for Texas Southern, cutting the Panthers’ lead down with a trio of layups. Eden Ewing and Combs each followed with scores on the inside as the Tigers tied the game.

Antione Lister buried back-to-back threes to put PVAMU back in front, but Patterson responded with a three-pointer to bring TSU within one, and Devocio Butler converted a three-point play to put the Tigers ahead 63-62.

After PVAMU reclaimed the lead with a Taishaun Johnson basket, both sides traded points. With the contest tied at 81 with 2:35 left, Dennis Jones converted a driving layup with 2:00 left to put PVAMU ahead 83-81. Patterson knotted it back up with 1:25 left, and Darius Williams sank a pair of free throws to put the Panthers up 85-83 with 1:12 remaining.

Reed tapped home a Patterson miss to tie the game with 36 seconds left, and PVAMU’s Devonte Patterson sank a pair of free throws to put the Panthers up 87-85 with 26 seconds to go, and Jones sealed the championship for Prairie View A&M with clutch shooting from the line the rest of the way.