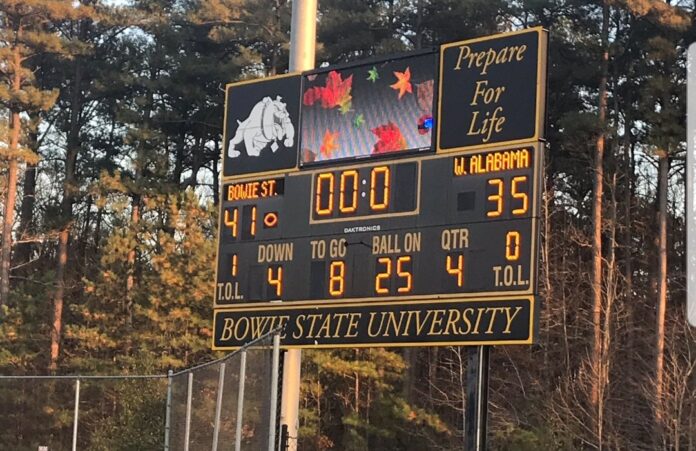 BOWIE, Md. – Amir Hall passed for 360 yards and rushed for 51 more as Bowie State held off West Alabama, 41-35, in the first round of the 2018 NCAA Division II Football Playoffs Saturday at Bulldog Stadium.

Hall passed for two touchdowns and ran for two more as Bowie State rang up 439 total yards to 351 for West Alabama.

Bowie State improved to 10-2 with the first playoff win in school history. West Alabama ends its season 8-4 after making its fifth playoff appearance since 2009. The Bulldogs will travel to No. 1 seed Valdosta State next week for the second round.

Down 17-14 at the half, West Alabama trailed 27-21 after three quarters. After a BSU pick six seemingly put the game out of reach at 41-28 with 9:09 left in the game, West Alabama cut the score to the final margin and drove to the Bulldog 23-yard-line before turning the ball over on downs with 1:14 left.

West Alabama had just one timeout, so Bowie State bled the clock to ensure the win.

HOW THEY SCORED
West Alabama opened the scoring with a 9-yard touchdown pass to Tyriq Martin from Harry Satterwhite on the opening drive of the game for the Tigers. The drive covered 78 yards on seven plays in 2:06.

Amir Hall connected with Jordan Crockett on a 9-yard TD pass with 10:00 left in the first half. The TD pass was the 100th of Hall’s career at Bowie State.

West Alabama tied the game at 14-14 on a 38-yard TD pass from Satterwhite to Jonnas Spiveywith 3:03 left in the first half.

Gene Carson gave Bowie State a 17-14 lead with 57 seconds left in the second quarter by drilling an 18-yard field goal.

Bryan Ellis scored on a 3-yard run with 7:34 left in the third quarter to stretch the lead to 27-14. The TD was set up by an interception returned to the Tigers’ 3-yard-line by Roger Richardson.

Tyler Rogers rambled untouched for a 14-yard TD run with 1:51 left in third quarter to cut the Bulldogs lead to 27-21. The 14-play, 75-yard drive was kept alive when BSU had too many on the field on a UWA punt.

Satterwhite and Christian Saulsberry connected on a 17-yard touchdown pass on the first play of the fourth quarter. UWA led 28-27 with 14:55 left to play.

It took Bowie State just over three minutes to retake the lead, with Hall scrambling for a 5-yard TD run and a 34-28 fourth-quarter lead.

Roger Richardson’s second interception of the game goes for 64 yards and a touchdown, giving Bowie State a 41-28 lead with 9:09 to play.

THEY SAID IT
UWA Head Coach Brett Gilliland
“We are obviously disappointed . We had 22 seniors who have made a huge impact on our program.”

“Bowie State is a heckuva team and they showed that today. Amir Hall is a special player and he played very well today. Going in we knew he was a challenge and he proved it.”

“That was two great teams going at it. We knew Bowie State would play a lot of man coverage with their hands on us and we would have to respond. Sometimes we did and sometimes we didn’t. The turnovers were costly.”

“I am so proud of Harry Satterwhite. He has meant so much for our program. He has played injured all year long and never missed a beat. He is one of the toughest guys I know and have had the privilege to coach.”

BSU Head Coach Damon Wilson
“This is a huge win for us, the first playoff win in school history. We are just trying to add to the legacy. The guys have bought in to what we are doing.”

“We gave up more points today than we have in a long time and we didn’t play well on special teams.”

“I am so thankful that (defensive back) Roger Richardson transferred to our program last year. He has come here and made his mark.”

UWA Tight End Qua Boyd
“It hurts being a senior. Now I have to decide what I am going to do. Most people do not know I have another year left, so I have a decision to make.”

“Bowie State is a great university and a great football team. They made more plays today than we did. I really wish I could have gotten to play Valdosta State again because I had an injury in the regular season against them that cost me three games, but I wish Bowie State luck down there.”

UWA Linebacker Terry Samuel
“Bowie State has a great quarterback and a great scheme. We just had a couple of hiccups.”

Bowie State Quarterback Amir Hall
“They played their game and we played ours. I didn’t see anything I hadn’t seen on film. It was like we were trading punches for the first few series”

“It’s crazy how life goes. We were right back in the same spot where we were last year, but we got a win this year. I told myself that when we were in the red zone and the play wasn’t there to just run the ball.”