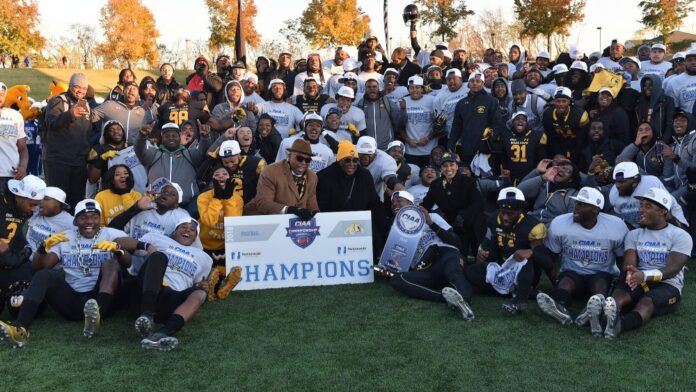 SALEM, Va. – From the opening kick-off, the Bowie State Bulldogs never looked back claiming their first CIAA Football Championship in a 30-10 rout of Fayetteville State on a blistering afternoon in Salem Stadium.

First Quarter:
Bowie State gained the momentum early as the Bulldogs forced a fumble on the opening kick-off. The Bulldogs started the drive at the Fayetteville State 25 yard line. Chrishon Springs recorded a tackle for loss before forcing a turnover on downs.

Fayetteville State’s Stevie Green tallied four rushes on the drive for 21 yards before the Bulldogs forced a punt.

Bowie State methodically moved the ball down the field following the punt on a 13 play 87-yard drive to score the opening touchdown of the contest. Amir Hall completed 4-5 passes for 40 yards on the drive before calling his own number from 14 yards out. Gene Carson added the extra point for the early 7-0 with 3:11 remaining in the quarter.

Fayetteville State was unable to get the offense moving as BSU’s Oluwaleke Ajenifuja forced the strip sack and the recovery to give the Bulldogs’ offense the ball at the 19-yd line. Amir Hall posted his second rushing touchdown of the contest on a 6-yd scamper to give the Bulldogs a 14-0 lead.

The Bulldogs defense would force their third turnover of the quarter as Thomas Riddick picked off Collyn Anderson’s pass.

Second Quarter:
Bowie State was unable to convert on fourth-and-seven to hand the ball back to Fayetteville State. Stevie Green gave the Broncos some momentum with a 20-yd rush to take the ball to midfield. Stevie Green continued to carry the offense breaking two tackles on a swing pass for 18-yds. The Broncos would get on the board with 8:13 remaining in the quarter with a 28-yd field goal by David Lamb.

The teams would settle in during the middle of the quarter before Amir Hall broke off an 80-yd run to put the Bulldogs up 21-3 with 3:55 remaining in the half.

The half would close with Bowie State leading Fayetteville State 21-3 as the Broncos would commit their fourth turnover in the contest as Oluwake Ajenifuja recovered a fumble to end the drive.

Third Quarter:
Bowie State would set up shop after Jordan Crockett gave the Bulldogs excellent field position following the second half kick-off. Amir Hall would connect with Montez Clay and Lansana Sesay on the drive to break the all-time CIAA passing yards record. The Bulldogs would settle for the chip-shot field goal to extend their lead to 24-3.

After a punt by the Broncos, Bowie State continued to extend their lead to 30-3 as Amir Hall found Daryl Jasper on the post pattern for the 13-yd touchdown. Fayetteville State’s Brandon Smith would block the extra point.

Taylor Johnson for Bowie State would force a punt after sacking Collyn Anderson on third-and-long.

Fourth Quarter:
Amir Hall found Maurice Williams on a screen pass for 39-yards before being stopped inside the five-yard line. FSU’s defense led by Xavier Thompson forced an interception on fourth down in the end zone.

On the first play of the drive, Stevie Green broke off a 55-yd run to put the Broncos in Bowie State territory. Donshel Jetton rushed for 23-yds to put Fayetteville State inside the red zone. Xavier Bullock led the Broncos to a scoring drive with a 6-yd touchdown pass to Brandon Person-Boyd in the back of the end zone. David Lamb converted the extra point to close the gap to 30-10 with 9:45 remaining in the contest.

Collyn Anderson looked to mount one final scoring drive for the Broncos starting the drive with a 26-yd quarterback keeper with 3:53 remaining in the contest. Penalties would stall the drive as Anderson’s pass to Jalen Gavin was not enough on fourth down.

Bowie State would wrap up the contest in victory formation. The Bulldogs are were ranked 4th in the NCAA D2 Region 2 Super Region Poll coming into the conference championship game and will receive an official invitation to postseason play on Sunday (November 11th) when the NCAA Selection show airs at 5 p.m. (ET) at NCAA.com.