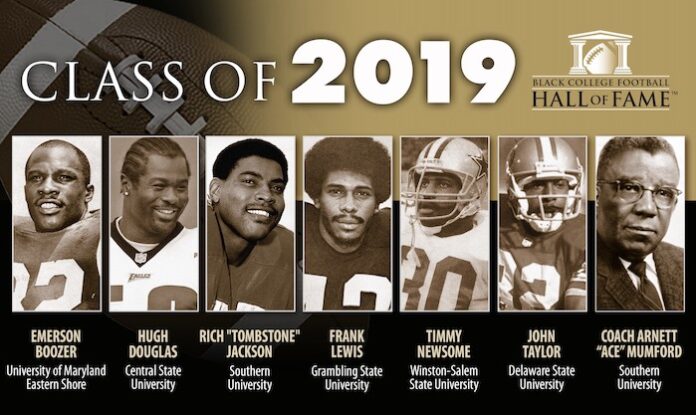 (Atlanta, GA) – The Black College Football Hall of Fame (BCFHOF) announced its 10th Class today – the Class of 2019. Seven inductees were selected from a list of 25 Finalists who had been determined earlier by the BCFHOF Selection Committee.


“On behalf of the Board of Trustees, we congratulate the Class of 2019,” said BCFHOF Co-Founder and 2011 Inductee Doug Williams. “To be inducted into the Black College Football Hall of Fame in its first 10 years is quite an honor. Just take a look at those historical names.”

Votes were tallied from the 12-member Selection Committee, comprised of prominent journalists, commentators and historians, as well as former NFL General Managers and executives, and from previous BCFHOF inductees to determine the Inductees.

The Inductees will also be recognized at the Celebration Bowl in Atlanta on Dec. 15.