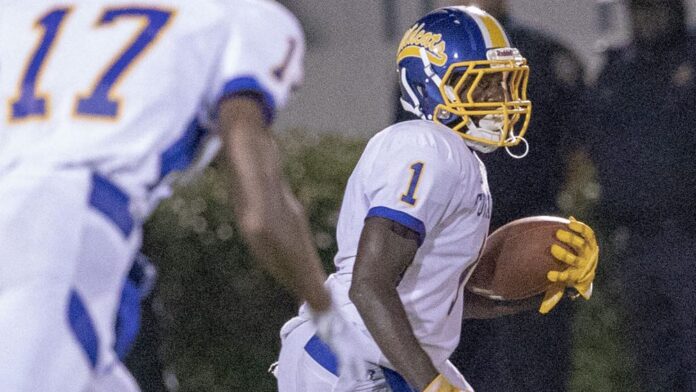 ATLANTA, Ga. – In a real tale of two halves, the Wildcats spun the best tale in sudden fashion for the upset. The defending Southern Intercollegiate Athletic Conference East champion, Fort Valley State, may not be headed back to the title tilt, but Lorenzo Smothers’ 96-yard kick return touchdown with 3:16 left in the game helped his team pull the 27-22 upset, and keep Morehouse College from qualifying for this year’s contest.

After having everything go their way in the first 30 minutes, the Wildcats (2-7/2-3 SIAC East) took a 21-2 halftime lead, but they saw the tables turn. The seventh-rated Region 2 Maroon Tigers (7-2/3-2 SIAC East) edged ahead 22-21 for all of 16 seconds as Smothers bobbled the kickoff before he regained his composure and cut through the defenders down the right sideline 96 yards for the game-winning touchdown, 27-22. Following a Niykiem Floyd sack on third-and-19, the FVSU defense forced one final Morehouse incompletion to seal the win with seven seconds left at the visitors 32-yard line.

With the win, FVSU takes it winning streak over Morehouse to four games. The Wildcats’ 27 points is also a season-high.

Smothers finished the day with 250 all-purpose yards, including 139 yards on three kick-off returns. The sophomore pulled in four passes for 65 yards with a 16-yard second-quarter touchdown, rushed seven times for 37 yards and added a nine-yard punt return.

Quarterback Demontay Jones had a tough day with only 101 yards passing on 7 of 18 attempts with two touchdowns, but three interceptions. FVSU was outgained 171 to 322 in total offense and saw Morehouse hold the ball for 17:22 longer.

Aaron Dore, who had 1.5 tackles for loss, and Andrew Robinson paced the Wildcat defense with nine stops apiece. Zach Anderson added seven tackles, one for loss, and David Brown had six tackles.

Leading-tackler Camron Young accounted for only four tackles, but he did block a Maroon Tigers punt and recovered it in the first half. Voris Bryant (6 tackles, forced fumble) and Floyd (5 tackles) each had a sack.

For Morehouse, the running back duo of Santo Dunn and Frank Bailey, Jr., combined for 185 yards on 38 rushes and two scores.

On the second possession of the day, the FVSU offense drove 63 yards for the game’s first points. On 4th-and-2 at the home 31-yard line, Jones found Smothers for a 14-yard completion to keep the drive going. On the next set of downs, Jones scrambled eight yards for the touchdown and 7-0 lead at 8:48 in the first stanza.

Following a Young blocked Morehouse punt and recovery late in the first quarter, Jones connected with Smothers from 16 yards on the game’s next play to extend the difference to 14-0 only 52 seconds in the second quarter.

The Maroon Tigers put a safety on the scoreboard when the Wildcat punter did not field the snap cleanly and saw it recovered in the end zone, 14-2, at 8:33 in the first half.

With 1:58 left in the second frame, FVSU took over on the home 49-yard line and took advantage. On the fourth play, Jones fired to Jeffery Mack from 27 yards and took a 21-2 lead to the half.

Morehouse took the ball to the ground on three long, time-eating drives. With its second possession, a Michael Sims 16-yard touchdown pass, 21-8, was the first tally on an 89-yard drive.

FVSU aided the Morehouse comeback as Jones caught his third interception on the next Wildcat time with the ball. The Maroon Tigers ran off another 8:06 resulting in a Dunn 4-yard touchdown plunge for a 22-21 lead at 3:32 to go.

The Wildcats moves on for the season finale at the Fountain City Classic next Saturday, Nov. 3. FVSU battles rival Albany State in a 2 p.m. kick-off in Columbus, Ga.