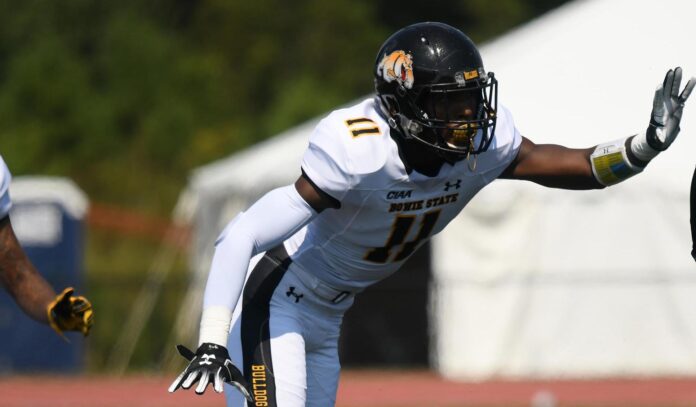 RICHMOND, Va. – Bowie State earned a huge CIAA divisional win on Saturday afternoon, knocking off the previous Northern Division leader Virginia Union Panthers by a score of 27-13. The win propels the Bulldogs into first place in the North, improving to 6-2 overall, 3-1 in league play and 2-1 in the North.

Virginia Union scored on the games’ opening possession when Jefferson Souza kicked a 39-yard field goal with 10:54 on the clock.

Bowie State senior Amir Hall connected with junior Brandon Abrams for a 56-yard touchdown at the 9:39 mark of the first quarter. Junior Gene Carson (Accokeek, Md.) booted a 17-yard field with 4:03 left in the first quarter to give the Bulldogs a 10-3 lead.

Carson added another field goal, this time for 23 yards with five seconds left in the second quarter to send Bowie State into halftime with a 13-3 advantage.

Virginia Union quarterback Darius Taylor rushed for a 6-yard touchdown, and Souza added the extra point to trim the Bowie State lead to 13-10 with 3:01 left in the third quarter.

Senior Maurice Williams scored on a 40-yard touchdown pass from Hall to give Bowie State a 20-10 advantage with 11:57 to go in the contest. With the TD pass, Hall became the CIAA’s All-Time leader in TD passes surpassing Earl “Air” Harvey (N.C. Central) record of 89.

The Panthers closed the gap to 20-13 with just over nine minutes to play, following a 43-yard Souza field goal.

Abrams capped off a 14-play, 88-yard drive with a 9-yard touchdown run to put the nail in the coffin and lift the Bulldogs into first place in the CIAA North.

Hall completed 33-of-49 passes for a game-high 37 yards, and Abrams rushed for a team-high 55 yards to pace Bowie State’s offense. Hall also rushed for 47 yards in the contest. Redshirt sophomore Montez Clay led all receivers with 97 reception yards on 11 catches. Senior Derrick Tate led the Bulldogs’ defense with seven tackles while freshman Joshua Pryor, redshirt junior Tommar Phillips, and senior Roger Richardson chipped in five tackles each in the victory.