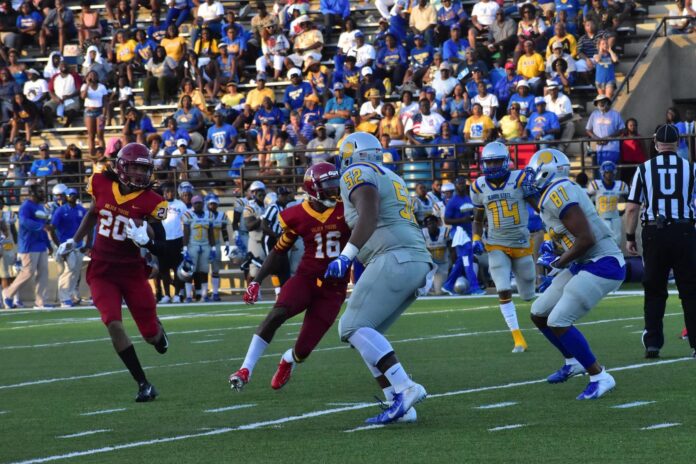 In a game that featured a combined 22 penalties, defense ended up telling the story in this battle with defensive back Rorrick Steward claiming Most Valuable Player honors for the Golden Tigers. TU was only able to rush for a total of 58 yards while the Golden Rams were held to 91 yards passing.

After a scoreless first quarter, Jamarcus Ezell connected with Chardian Johnson for a 31-yard touchdown pass within the first four minutes of the second quarter. The PAT failed. With 13 seconds left before the end of the first half, Ezell would have to sit for one play after his helmet inadvertently came off. On the ensuing play, backup quarterback Ahmad Deramus would find Javarrius Cheatham on a 31-yard strike to put the Golden Tigers ahead 13-0 after the PAT, which is how the half would end.

ASU played a pair of quarterbacks as well with Kelias Williams completing 7 of his 14 attempts for 46 yards and two interceptions. Masha Stephon was 3-of-7 for 45 yards. He also tossed one INT. Javon Wooten was the leading receiver for the Golden Rams hauling in two catches for 44 yards. TU’s Ezell was an efficient 11-of-15 for 173 yards and one touchdown while reserve QB Deramus completed all four of his attempts for 79 yards and one score.

Albany State’s defense was led by Tyler Scott’s 12 tackles, eight of those were made in the first half. The Golden Rams also notched five sacks on the night.

TU was paced by Davoris Thomas who finished with five stops. Steward, the game’s MVP had three tackles.

Neither team could find the end zone in the third quarter but that would change when Steward scored the game’s only TD of the fourth quarter, with a 35-yard interception returned to round out the scoring.