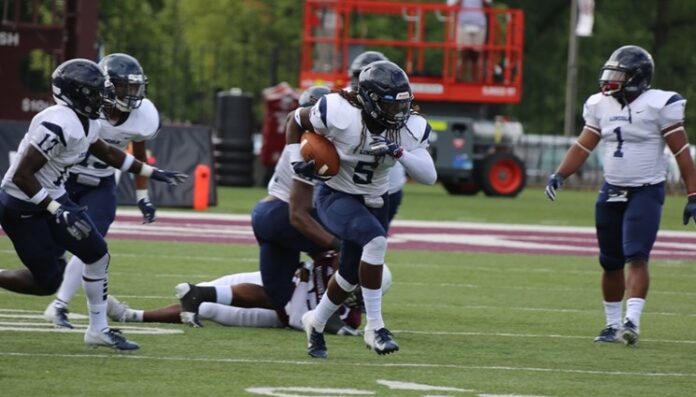 SPRINGFIELD, Mo. – The Lincoln football team jumped out to a 10-0 start and led after the first quarter, but Missouri State, an NCAA Division I opponent, rallied to hand the Blue Tigers a 52-24 loss on Thursday (Sept. 6).

The Lincoln (1-1) defense forced Missouri State (1-1) to fumble the opening kickoff, then capitalized as Fernando Ramirez made a 34-yard field goal to give LU the lead less than three minutes into the ballgame. The Blue Tigers forced two more turnovers in the opening period, with Edwin Durassaint scooping the second up for a 78-yard fumble return touchdown.

Missouri State responded with a quick scoring drive to pull within three, and LU took a 10-7 lead into the second quarter. The Bears dominated that period, scoring four touchdowns to take a 35-10 advantage into the half.

Lincoln struck first in third quarter, as Henry Ogala found Antonio Issac for a 15-yard scoring strike at the 12:54 mark, and the Blue Tigers later scored the final points of the ballgame late in the fourth quarter on a 10-yard grab by Justin Korakakos in the back corner of the end zone. Missouri State out-gained Lincoln, 507-264, for the game, however, and recorded seven sacks in the contest.

Ogala capped off an efficient performance with 16 completions in 21 attempts and two touchdowns with no interceptions. A’Jani Johnson led the receiving corps with five grabs for 70 yards, and Blake Tibbs added 63 yards on four receptions, including a 46-yard catch-and-run to set up Lincoln’s second touchdown. Hosea Franklin led the rushing attack with 79 yards on 16 carries, a 4.9 average.

Hasan Muhammad-Rogers and Chavon Gross tied for the team lead with six tackles apiece, and Victor Williams had five while Isaiah Gray and Garen McKinney each tallied four. Gray, Joseph Madrigal and Quan Mason each made tackles for loss, with Mason additionally posting a sack.

Wolky Belancourt averaged 40.4 yards on five punts, and Donovan Wright was LU’s top returner with 106 total yards. Fernando Ramirez, meanwhile, averaged 49.0 yards on four kickoffs. Lincoln controlled the clock with a possession time of 38:30 and converted on all three of its opportunities inside the red zone.

The Blue Tigers will play at home for the first time in 2018 on Saturday, Sept. 15 as Lincoln hosts Wisconsin-Oshkosh for a 1:00 p.m.