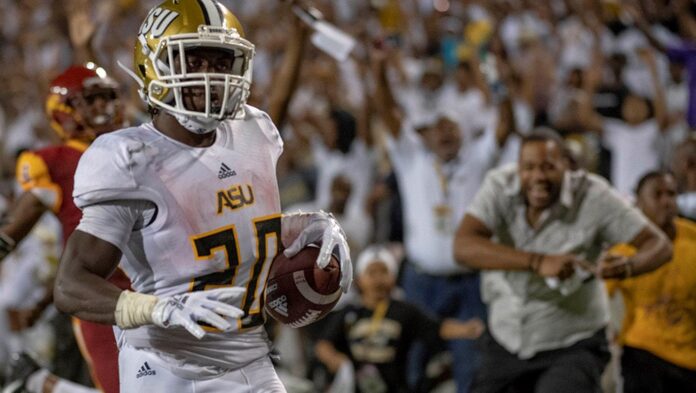 MONTGOMERY, Ala. – Alabama State ended a six-year drought when Ezra Gray took a handoff and outran everyone down the left sideline to give Alabama State a 26-20 overtime victory over rival Tuskegee in front of 26,222 Saturday night.

The Hornets, who trailed most of the game, sent the game into overtime when Darryl Pearson, Jr. scored on a quarterback keeper with 5:09 remaining in regulation to tie the game at 20-all. Alabama State (1-0) stymied the Tuskegee offense and forced a punt, before running out the clock to force overtime.

Tuskegee (0-1) picked up a first down on their first play from scrimmage, before committing three consecutive penalties pushing the ball back to the Alabama State 43-yard line. After a 17-yard run by quarterback Jamarcus Ezell, the Golden Tigers lined up for a 43-yard field goal attempt. The attempt was blocked by Christian Clark, giving the Hornets the ball for their possession in overtime.

Alabama State wasted little time getting into the end zone, as Gray took the hand off from Pearson and outran three defenders down the sideline for the score. The score sent students and alumni alike over the barriers over the field as the Hornets claimed a win over Tuskegee for the first time since 2011.

The Golden Tigers scored on the first possession of the game when Justice Owens went up the middle from 13 yards out for a 7-0 lead with 12:14 remaining in the opening quarter. After Alabama State marched down the field, the drive stalled and Tuskegee again moved the ball against the Hornet defense – getting the ball down to the one-inch line. However, the Hornet defense stood its ground and blocked the first of two field goals on the night to keep the deficit at one possession.

Alabama State got on the board for the first time this season with a 68-yard catch and run by Tyrek Allen to tie the game at 7-all before Tuskegee answered with a 35-yard run from Kenny Gant for a 13-7 lead after the extra point was missed.

The Hornets got on the board one more time with a 20-yard field from Hunter Hanson with 6:16 remaining in the half before they tied the game at 13-all with a 25-yard field goal from Hanson.

Alabama State won for the first time in six years in the season opener, with the last coming against Mississippi Valley State in 2011 – a 41-9 victory. The win also was the first against Tuskegee since the same season, a season in which the Hornets finished 8-3.

The Hornets return to action Saturday at ninth-ranked Auburn, in a game that can be seen on the SEC Network Alternate Channel and heard on the Hornet Sports Network. Kick is set for 6:30 pm next weekend.