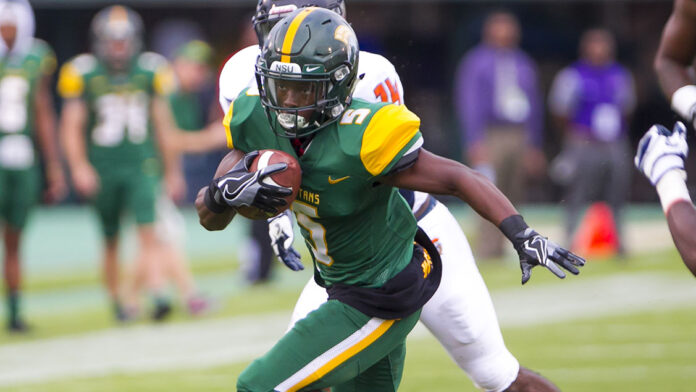 Taylor played a big role with a career-best performance in Norfolk State’s win over No. 25 North Carolina Central on Saturday as he caught eight receptions for 132 yards and two touchdowns. The Highland Springs, Va. native scored on a 42-yard swing pass in the second quarter and a 58-yard catch and run in the fourth that helped NSU keep the lead for good en route to his second straight 100-yard receiving game. Taylor also played a big role on special teams as he totaled 52 yards on four returns.

Smith matched his career high with 18 tackles (one for loss), two interceptions and a forced fumble as the Spartans defeated North Carolina Central for the first time since 1995. Smith had one interception in NCCU territory that set up a second-quarter NSU touchdown as his second pick sealed the win in NSU territory with less than a minute left. The Norfolk native also forced a fumble at the NSU 1-yard line as NCCU was going in for the tying score in the first quarter, which the Spartans recovered.

Ghee led an offensive line that produced a season-high 405 yards of total offense in Hampton’s win over Florida A&M. He allowed no sacks and had three pancake blocks as it marked the second straight game the offense had no turnovers.
ROOKIE OF THE WEEK

Carter completed 18-of-32 passes for 230 yards and a career-high four touchdowns in NSU’s win over North Carolina Central. He was also NSU’s top rusher and finished with 253 yards of total offense.

SPECIALIST OF THE WEEK

Goettie punted eight times for a 40.1-yard average as he placed three punts inside the NCCU 20 as two landed inside the Eagles’ 10-yard line.

Kyle Anthony (WR/Howard)
Anthony recorded 123 yards receiving on three passes; including a 75-yard reception for a touchdown against Morgan State.

Yoseff Banks (DB/Howard)
Banks led the Bison in tackles on special teams in the homecoming victory over Morgan State.

Larry Brihm, Jr. (QB/Bethune-Cookman)
Brihm connected on 18-of-29 passes for 144 yards and a touchdown in the Wildcats’ contest at North Carolina A&T State. Brihm also rushed for a touchdown that put the Wildcats up, 20-17 in the third quarter.

Eric Harrell (RB/Morgan State)
Harrell finished with 16 carries for 93 yards and a touchdown. Harrell also had an 18-yard reception in the contest at Howard.

Marquis Hendrix (LB/Bethune-Cookman)
Hendrix collected a team-best eight tackles; including six stops by solo performance, as well as a quarterback sack for a loss of five yards. He had one of the team’s two sacks on the afternoon.

Uriel Hernandez (PK/Bethune-Cookman)
Hernandez was a perfect 2-for-2 on field goals, as well as 2-for-2 in point after attempts. He connected on field goals of 33 and 31 yards, respectfully.

Deion Jones (LB/North Carolina A&T State)
Jones led the Aggies with a career-high 10 tackles. His interception in the third quarter ignited a fourth-quarter comeback that led to the Aggies over Bethune-Cookman.

Rico Kennedy (LB/Morgan State)
Kennedy led the Bears with six solo tackles, including three tackles for loss and a pair of sacks at Howard.

Shai McKenzie (RB/Hampton)
McKenzie recorded season highs in carries (19) and yards (147) in his first start of the year to lead Hampton over Florida A&M. His 37-yard run late in the fourth quarter set up Hampton’s game-winning touchdown.

Brandon Parker (OL/North Carolina A&T State)
Parker led a fourth-quarter push where the Aggies rushed for 50 yards to clinch the win over Bethune-Cookman. He freed quarterback Lamar Raynard so that he could throw a 45-yard touchdown pass to Xavier Griffin.

Lamar Raynard (QB/North Carolina A&T State)
Raynard completed 11-of-25 passes for 175 yards; including three touchdown passes in the second quarter. He also caught a 25-yard pass that led to the game-winning touchdown pass against Bethune Cookman.

Ryan Stanley (QB/Florida A&M)
Stanley connected on 13-of-19 passes for 220 yards and three touchdowns. He also ran four times for 17 yards on the day against Hampton.

Jakaris Wilson (LB/Florida A&M)
Wilson secured 15 tackles (7 solo), one tackle for a loss, and a sack against Hampton on Saturday.