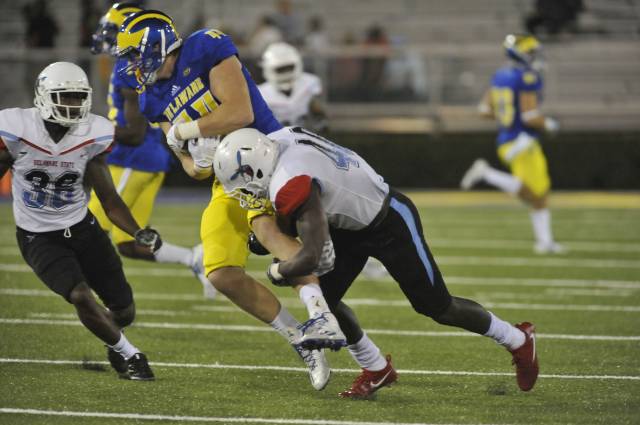 Newark, Del. — Delaware State held First State rival Delaware to its lowest scoring total in the eight-year history of the series, but it was not enough to prevent a 22-3 loss to the Hens in the season opener for both teams at Tubby Raymond Field this evening. The Hornets remain winless in the series, which began with in 2007. Delaware’s previous low against the Hornets was 27 points in 2009 & 2014. The Hens were playing their first game under new head coach Danny Rocco.

Delaware was also aided by two second half Delaware State turnovers that put an end to promising drives.

The Hornet defense kept Delaware out of the end zone for more than 42 minutes before surrendering third and fourth quarter touchdowns to put the game out of reach.

Delaware took advantage of a perfectly placed punt by Nick Pritchard to score the first points of the game late in the opening quarter.

On DSU’s first play from scrimmage after Pritchard’s punt was downed at the Hornet two yard line, Mike Waters was tackled on a rush attempt in the end zone for a safety to give the Hens a 2-0 lead with 2:07 to go in the first quarter.

After Frank Raggo kicked his second of two second quarter field goals, the Hens were ahead 8-0 with 2:22 left before halftime.

After being held to just 12 total yards on its first four possessions, Delaware State began to show some life on offense late in the second quarter to get on the board.

The Hornets picked up their initial first down of the game when true freshman quarterback Jack McDaniels completed a 24-yard pass to Fatu Sua-Godinet with 1:50 left in the second quarter.

Later in the drive, McDaniels and Sua-Godinet connected on a 42-yard pass to the Delaware nine. On the next play, Brycen Alleyne rushed for eight yards to the Blue Hen 1. The Hornets were stuffed on the next two plays and had to settle for a 24-yard Wisdom Nzidee field goal to cut the UD lead to 8-3 with 21 seconds left before intermission.

Delaware had a chance to extend its lead at the half, but Jake Roth missed a 49-yard field goal attempt as the second quarter clock expired.

The Hens took advantage of DSU’s first turnover of the game to put the Hornets further behind.

Five plays after Alleyne lost a fumble at the Delaware 48 in the third quarter, UD quarterback Joe Walker scrambled away from pressure and found Diante Cherry in the end zone for a 31-yard touchdown pass. The extra point kick by Frank Raggo gave the Hens a 15-3 lead with 2:48 left in the third quarter.

Delaware State’s chance to cut into the deficit later in the third quarter also ended in a turnover. Aided by a 15-yard fourth down run by Devin Adams out of punt formation, the Hornets moved the ball to the Delaware 43-yard line.

On the next play, Alleyne rushed to the UD 20, but lost the ball on the tackle. The ball was recovered by the Hens, ending the Hornets’ seven-play, 59 yard drive on the last play of the third quarter.

Delaware scored its final touchdown on a 19-yard end around run by Cherry with 6:22 left in the fourth quarter.

McDaniels, the first true freshman quarter back to start a season opener in recent memory for the Hornets, completed 12-of-28 passes for 165 yards. He threw an interception in the fourth quarter when the game was out of reach.

Sua-Godinet had four catches for a career and game-high 93 yards.

Alleyne was DSU’s leading rusher with 47 yards on nine carries.

Walker connected on 13-of-26 passes for a career-best 192 yards and a touchdown for the Hens. He was intercepted once, by Hornet cornerback Keyjuan Selby with 1:52 left in the first quarter. It was the first pick of Selby’s career.

“Our effort was superb on both sides of the ball, but it wasn’t enough against a good team like Delaware, ” said Hornet head coach Kenny Carter. “Our defense kept Delaware out of the end zone for a good while to keep us in the game. Our offense showed some good signs, but we must do a better job finishing plays and drives. This game is behind us now. We have plenty to build on, but much to do before playing our conference opener next week. ”

The DSU coach was also impressed with the play of his first-year signal-caller.

“Jack showed a great deal of poise for a freshman quarterback in his first game, especially given the pressure he was under at times in the game.” Carter said. “He made some nice throws and showed why we are so high on him.”

The Hornets return to action on Fri., Sep. 8 in their MEAC opener against Hampton. Game time is 7 p.m. in Hampton, Va.

STINGERS
Delaware State did not record its first interception until week nine vs. North Carolina Central in 2016 … Hornet linebacker Malik Harris (sr.) led all players with nine tackles (five solo), including a 10-yard sack . Selby and outside linebacker Garfield Heslop added eight tackles each … DSU receiver Jordan Hannah had his first career receptions, catching two passes for 23 yards, including a long of 17 yards … freshmen receiver Kwannah Kollie had a 20-yard catch, while first-year running back Nyfease West caught one pass for eight yards … DSU punter Fidel Romo-Martinez averaged 41.5 yards on six punts, including a long of 61.