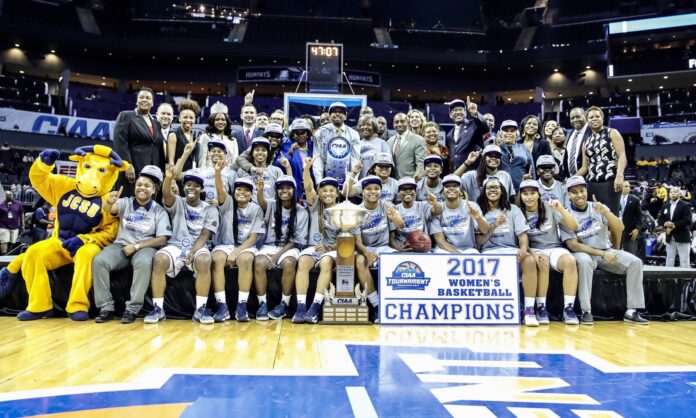 The Golden Bulls earn the CIAA automatic bid to the upcoming NCAA Division II Regional Tournament with the victory and improves to 22-7. Virginia State concludes their season with a 22-8 record.

Virginia State controlled the pace of play early in the fourth quarter taking the early 12-6 lead. Johnson C. Smith shook off any championship jitters that might have had making three of their last six shots after starting the game 1-for-11, producing an 11-3 run to take a 17-15 lead heading into the second quarter. Virginia State’s Nandi Taylor had 13 of her team’s 15 points, going a perfect 3-3 from three-point range.

Johnson C. Smith limited Virginia State to just two field goals in the second quarter while extending their lead to as many as 12 before the Trojans scored the final four points of the period, giving JCSU a 33-25 lead at the break. Jordan had six of Johnson C. Smith’s 16 second quarter points and led the team with 13 points at the half. The Golden Bulls shot 33.3% (11-33) in the first half and were perfect from the free throw line (11-11). JCSU also took full advantage of their depth with their bench outscoring VSU 21-5 and scored 12 points off 11 Virginia State turnovers.

Virginia State clawed their way back within four points by the end of the third quarter, 46-42. The Trojans got nine points from Taylor, seven of those coming at the free throw line as they used a 6-0 run midway through the quarter to cut a ten-point Golden Bull lead down to four. Two free throws from Taylor at the 4:18 mark cut JCSU’s lead to three at 39-36. The Golden Bulls increased their lead back to seven before a 5-2 run by the Trojans made the score 46-42 at the end of three periods.

Johnson C. Smith’s lead oscillated between four and seven points during the first four minutes of the final period until the Golden Bulls went on a 10-2 run to open a 12-point lead at 66-54 with 2:48 remaining. The long ball fueled the run as Jordan started the run with a three-point field goal and Rivers later added two more. Hickman’s three-pointer with 2:28 left closed the gap to nine but that would be as close as the Trojans would get as both teams exchanged baskets in the final minute to give Johnson C. Smith the CIAA Tournament championship with a 68-59 victory.

The Golden Bulls had a big advantage on the glass, outrebounding the Trojans 53-32 and their bench outscored VSU 47-14.