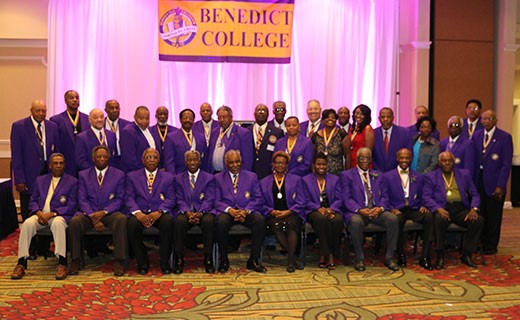 COLUMBIA, S.C. – A pair of football standouts, a baseball standout, a track and field star and a cross country and track and field coach, an athletic trainer and two of Benedict’s biggest fans and benefactors were inducted into the Benedict College Athletic Hall of Fame on Thursday night at the DoubleTree by Hilton hotel.

Erica B. Hepburn-Wade came to Columbia, S.C. as an international student from Nassau, Bahamas in January 1993 to attend Benedict College. She graduated with a Bachelor of Science degree in Business Management in May 1995. In 1996, she started as a chaperone and was soon promoted to Head Women’s Track and Field and Cross Country Coach while maintaining her position in the business office. During her coaching career, she was voted the 1999 EIAC Coach of the Year for women’s cross country and led Benedict to the 1999-2000 EIAC women’s outdoor track and field conference championship. She was also named the 1999 Regional Outdoor Track and Field Coach of the Year. Her women’s track and field team won the EIAC outdoor track and field championship again in 2001. She was named cross country Coach of the Year again in 2001. Mrs. Wade now serves as the Program Coordinator for Contracts Supplier and Diversity at the City of Columbia’s Office of Business Opportunities. [easyazon_infoblock align=”right” cart=”y” identifier=”B01M1DTUQ7″ locale=”US” tag=”hbcusports-20″]

Rev. Dr. Solomon Jackson is pastor and founder of Solomon’s Temple in Columbia, S.C. He earned a Doctor in Pastoral Ministry degree from Central Christian University of South Carolina, where he serves as Acting Chairman of the Board of Trustees. He has been awarded several honorary degrees, including a Doctor of Divinity degree from Morris College School of Religion in Sumter, S.C., and was elected to the College’s Board of Trustees in 2010. In 2011, he was conferred a Doctor of Humane Letters from Claflin University. He was appointed to the Benedict College Board of Trustees in 2014. Rev. Dr. Jackson grew up in the Wheeler Hill community of Columbia, and graduated from Booker T. Washington High School, where he excelled as a student athlete. He entered the ministry in 1978, serving for 10 years as the pastor of Macedonia Baptist Church in Ridgeway, S.C., and Hyco Baptist Church in Cassett, S.C., before leading Hyco Baptist Church’s ministry for 24 years. He is a member of the 100 Black Men of Greater Columbia, and the founder of the Solomon Jackson Jr. Foundation, which is dedicated to the support of students in higher education.

King David Range graduated from Carter-Paramore High School in Quincy, Fla. where he played football as a quarterback and defensive back like his dad and older brother before him. He entered Benedict College on a football scholarship and earned the nickname “Pony” because of his speed. King David was also a member of the Goodson Hall Men’s Club and the Physical Ed Club. He graduated from Benedict College in 1964 with a BS degree majoring in physical education & minoring in biology. King was employed as a physical education teacher in South Carolina, then the Range family moved to Washington, D.C., where he played defensive back with the NFL Washington Redskin’s farm team. Afterwards, King David became a PE & health education teacher and coached in the Virginia public schools, from which he is now retired. He earned his Master’s Degree in Education from Bowie State University, and graduate hours towards a Doctorate Degree from George Washington University.

James Redmond was a four-year member of the Benedict College baseball team. He was named SIAC Honorable Mention in 1968 and All-Conference in 1969. He played multiple positions, playing in the field and also as a pitcher. He led the team in home runs, runs batted in and batting average in 1967 and 1968. He also led the team in games pitched. He graduated from Benedict College in 1969 with a BS degree in business education. He received a Master’s Degree in secondary education from South Carolina State in 1981. He served in the U.S. Army and was a Vietnam Veteran. He retired from military service in 1996 after 26 years. Mr. Redmond began a new career in education. He taught computer applications at White Knoll Middle School from 1996 to 2011. He also has coached football and basketball at White Knoll since 1996, and formed the school’s first golf program in 2001, and is the current coach.

Rev. Dr. Booker T. Sears Jr. served as the head athletic trainer for three years under former football coach William “Hoss” Bracy. He came into the position after extensive training in athletic injuries and was trained as an emergency medical technician at Spartanburg General Hospital, where he was also trained in athletic injuries. Booker T. Sears was probably the most powerful athletic trainer in Benedict College football history. When Booker Sears spoke, it was like it came straight from the coach. In his very unassuming way, Booker T. knew everything about Benedict football, from scheduling to who was traveling to away games. Rev. Sears now serves as pastor at The Goodwill Baptist Church in Bronx, New York. Rev. Sears earned his Bachelor of Arts in the Philosophy of Religion in 1961 and Bachelor of Divinity degree in 1964, respectively, from Benedict College and J.J. Starks School of Religion in Columbia. In 1987, he received his Doctor of Divinity degree from Columbia Bible Institute. He pastored four churches in South Carolina prior to being called as the third pastor of Goodwill Baptist Church in 1985.

On the track, Louise Smith was known for her strong finish. The 1960 Benedict College women’s track & field team brought a lot of attention to the school, primarily because of Louise Smith. Benedict competed against Tennessee State, which had Wilma Rudolph on its team. Rudolph was considered the fastest woman alive in the 1960s. Due to the strong third leg run by Louise Smith, Benedict was able to hold on for second place in the featured relay race, finishing behind Rudolph’s Tennessee State team. Following her graduation from Benedict in 1965, Smith began a career as a school librarian and media specialist. She was named the South Carolina Association of School Librarians Media Specialist of the Year in 1996 and Teacher of the Year for Pendergrass Fairwold School in 2002. While at Pendergrass Fairwold, she implemented various programs in the library using assistive technology. As the library media specialist at Eau Claire High School, she was one of the first to implement an online catalog. Under her leadership, Eau Claire was one of the first schools with a TV production studio. She was also a certified cheerleading coach for five years and her squads were always among the championship contenders.

Dr. David Holmes Swinton is the 13th president of Benedict College. As president, Dr. Swinton oversees all areas and departments of the 146-year-old Institution with a student enrollment that exceeds 2,200. Recently, Benedict College was ranked one of the Top 10 Colleges in the nation to promote social mobility, cutting edge research and community service by Washington Monthly magazine.

Dr. Swinton is well known for his strong support of the Benedict College athletic teams. Among his long list of accomplishments at Benedict College, Dr. Swinton returned the Tiger football program after a 29-year absence, revived the marching band, as well as started new golf and tennis programs. Under his direction the college has implemented the first of three phases to develop a multi-million-dollar state-of-the-art sports complex, which features an 11,000-seat football stadium as its centerpiece

James Youman was a four-year starter on the football team for Coach Willis Bracy. He played both offensive and defensive line, and led the team in tackles on defense. He served as the team co-captain during his junior and senior seasons. He graduated from Benedict College in 1962 and served as Director of Youth Services in New York, New York for 25 years. He also spent 15 years as an investigator in New York.