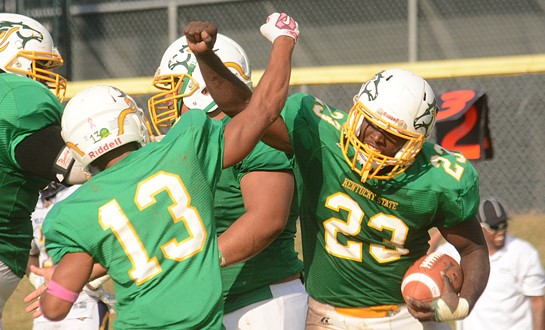 “A win like this is a signature win for our program,” said head coach John L. Smith. “Winning games like this on your home field against a conference opponent, shows we are heading in the right direction.”

Freshman quarterback Jules St. Ge rushed for a team-high 117 yards while throwing for 76 more. St. Ge went 9-17 and threw for one touchdown and an interception. Senior running back Darmontre Warr proved to be a stud adding 92 yards on the ground to go along with a touchdown in the contest. [easyazon_infoblock align=”right” cart=”y” identifier=”B01LXAHXGU” locale=”US” tag=”hbcusports-20″]

The defense was anchored by senior defensive back Vincent Edwards and sophomore linebacker Keonte Reynolds who each tied for a game-high, 15 tackles.

KSU (3-4, 3-1) fell to an early 10-0 deficit going into the second quarter before St. Ge tossed a nine-yard pass to sophomore wide receiver Charles Johnson with 0:31 left in half to cut the lead to three.

The Thorobreds’ momentum carried over into the third quarter after a 13-yard rushing touchdown from senior running back Reginal Harris giving the home team a 14-10 lead with 11:31 left in the quarter.

The Golden Bears reclaimed their lead following a rushing touchdown of their own with 7:13 left in the stanza before adding another score with 3:09 left to take a 24-14 lead into the final quarter.

KSU scored quickly with a rushing touchdown from Warr with 13:30 remaining in the final frame to bring the score to a 24-21 nail-biter.
Following a Golden Bears interception with 3:02 left in the game, the visitor’s attempted to run the clock down, but were unsuccessful. Deep in their own end zone MC bobbled a handoff with 2:10 left in the game allowing senior defensive lineman Nick Beckhum to dive on the ball to score what would be the game-winning touchdown.

The KSU offense finished the day with 352 yards of total offense, notching the second game in a row of over 300 yards. On the ground, the Thorobreds marched for a season-high 276 yards, behind St. Ge, Harris, Warr, and sophomore running back Lavelle Cloyd.

The Thorobreds will travel to Tuskegee University for an SIAC matchup next Saturday at 2:00 p.m.