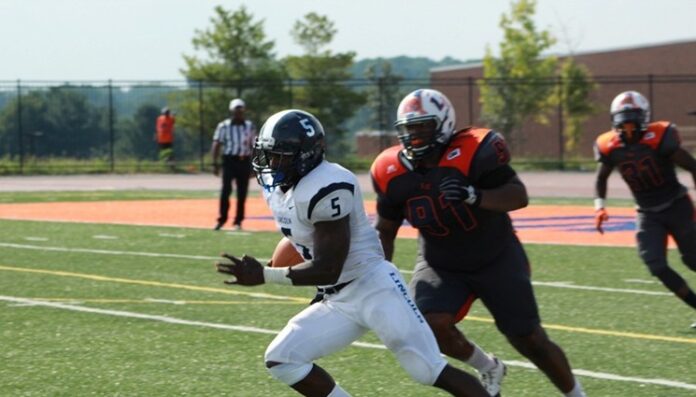 LINCOLN UNIVERSITY, Pa. – The Lincoln (MO) football team jumped out to a 17-0 lead early in the second quarter, but Lincoln (PA) rallied in the fourth to hand the Blue Tigers a 33-23 loss on Saturday (Sept. 10).

The Blue Tigers (0-2) scored on their opening drive, traveling 49 yards before Alex Templeton hit a 31-yard field goal. That ended up being the only scoring of the first quarter, which featured 65 yards of offense by the Blue Tigers compared to just five by the Lions (1-1).

The first touchdown of the day came with 10:51 remaining in the second quarter, as Will Randolph scored on 4th & Goal from the one to put the Blue Tigers up, 10-0. After forcing the Lions into a quick three-and-out, Andrew McIntyre, making his first career start at quarterback, found Chris Othelot in the end zone for a 25-yard touchdown.[easyazon_infoblock align=”right” cart=”y” identifier=”B00EN11F0Q” locale=”US” tag=”hbcusports-20″]

The Lions didn’t get on the scoreboard until there was 3:05 remaining in the half, hitting a 23-yard touchdown pass to cut the Blue Tiger lead down to 17-7 at the intermission. The Blue Tigers out-gained the Lions, 211-98, in the first half, including 95-35 on the ground.

Early in the third quarter, a fumbled snap recovered by the Lions ended up making it a four-point contest. Immediately after Lincoln (PA) recovered the football, the Lions completed a 12-yard to pass to get within 17-13 of the Blue Tigers. Rashon Riddles blocked the point after try, and on the Blue Tigers’ first play of the ensuing possession, Randolph rushed 66 yards for a touchdown. Randolph ended the day with 131 yards on the ground.

The ensuing extra point attempt bounced off the left upright, and that ended up being the final time the Blue Tigers would get on the scoreboard. A bad snap on a Blue Tiger punt allowed the Lions to take over on the 25, and two plays later a nine-yard run cut the Lincoln (MO) lead to 23-20 at the end of the third quarter.

The Lions took the lead for good on a 23-yard touchdown on their first drive of the fourth quarter, and the Blue Tigers never got any closer than the home 33 the rest of the way. The Lions closed the scoring on a 76-yard touchdown pass with just over five minutes remaining.

The Blue Tigers finished with a slight 353-348 advantage in total offense, and won the time of possession battle by holding onto the ball for 33:38 minutes. McIntyre completed 20 passes for 230 yards and a score, with 11 different Blue Tigers making at least one reception.

Defensively, the Blue Tigers were led by Jeff Jones, who had seven tackles, including three for loss. Marvin Holley added six tackles and an interception while Taj Moore made five takedowns. Riddles had a sack while Noah Johnson and Anthony Mitchell combined for another. Riddles also had a pair of quarterback hurries.

The Blue Tigers will return home to Jefferson City next week to open GLVC play against Quincy. Kickoff for that contest is set for 2:00 p.m. CDT.