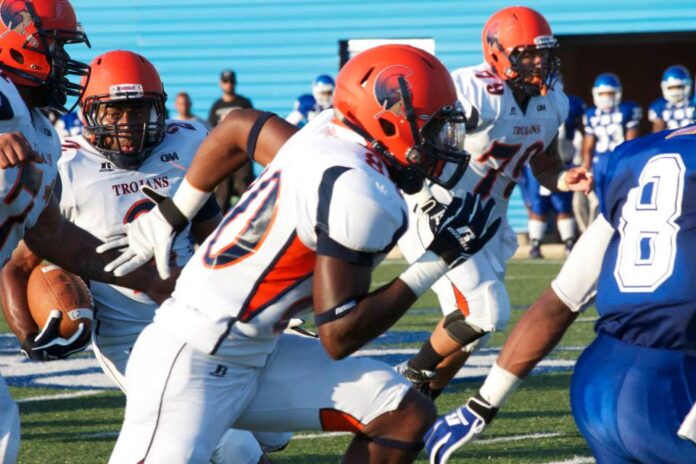 No, it’s not some new risqué internet sensation. It’s the number of new coaches roaming the sidelines in the Central Intercollegiate Athletic Association. The CIAA took its turn to make predictions for the 2016 football season Thursday in Durham, North Carolina.

However, there are other storylines at work in Durham. Storylines that could mean the difference between a CIAA title, a Division II playoff berth and just hanging up the shoulder pads at season’s end.

Which new coach has the best chance for success in 2016?

Of the five new coaches, Barlow and Hayes are getting some preseason love. Barlow and VSU are predicted to finish [easyazon_infoblock align=”right” cart=”y” identifier=”B01HJ3JQPA” locale=”US” tag=”hbcusports-20″]fourth overall and third in the Northern Division. The Trojans return preseason All-CIAA first-team selection Geo Feggins (78 total tackles; six sacks) on the defensive side, along with the one-two punch of running backs Trenton Cannon (CIAA’s second-leading rusher in 2015; 1,183 yards; 9 TDs) and Kavon Bellamy (640 yards; 6 TDs).

Hayes and FSU are picked to finish second in the Southern Division and fifth overall. Hayes inherits half of the preseason All-CIAA first-team secondary in Travis Scales and Eric Henderson. However, the Broncos have to figure out how to replace quarterback Derek Bryant and receivers Chris Hubert and Tavon Gatlin.

Will Winston-Salem repeat? Which teams are best suited to challenge?

The Rams, who defeated Bowie State in the 2015 CIAA title game, was picked to repeat as conference champions. However, WSSUs chances to repeat has some obstacles.

Then there is Bowie State. The Bulldogs, picked to win the Northern Division and finish second overall behind the Rams, has a conference-best eight preseason first-team selections — including receiver Nyme Manns (82 catches; 1,104 yards; 13 TDs) — to go along with a potential breakout star in quarterback Nyema Washington.