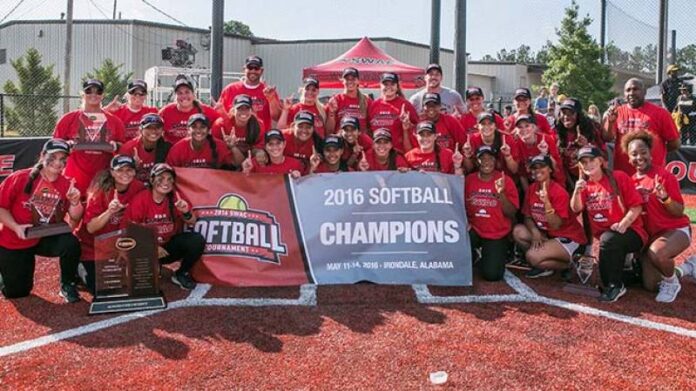 For the Lady Hornets (28-25), it was the avenging of a defeat at the hands of the Tigers (27-18) in last year’s tournament final. The 18 runs is the most by a team in the finals since Mississippi Valley State put up 16 runs in 2009, and six ALST players collected at least two RBI in the game. [easyazon_infoblock align=”right” cart=”y” identifier=”B011DRE8BK” locale=”US” tag=”hbcusports-20″]

The scoring started early for Alabama State, as tournament MVP Kendall Core (3-for-5, 4 RBI, 2 R) put the Lady Hornets on the board with a two-run shot in the first. TXSO got one run back in the second inning, but the Hornets opened up the game for good with a nine-run outburst, highlighted by another two-run blast from Core and two-run base hits by Laura Aguilar and Brittney Wilson. At the end of it, ALST led 11-1.

Texas Southern showed signs of life in the top of the fourth, as Domonique Tello (2-for-4, R) smacked a three-run double to cut the game to 11-5. But the long ball continued to pay off for Alabama State, as Alexia Boggess and Wilson (2-for-4, 3 RBI) hit back-to-back solo shots to extend the Hornets’ lead. Aleesa Yanez also left the yard for Alabama State.

The Hornets now await the news of their first opponent in the NCAA Softball Championship Tournament. The selection show will be broadcast on Sunday, May 15 on 9:00 P.M. (CST) on ESPNU. The all-tournament team is listed below.