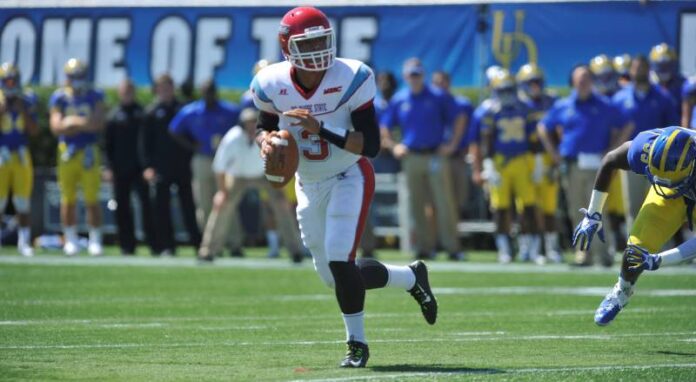 The renewal of the First State Rivalry with the Delaware Blue Hens, a visit to Missouri and five home games at Alumni Stadium highlight the 2016 Delaware State University football schedule announced today.

Delaware State will kick-off the 2016 season on Thursday Sep. 1 at the University of Delaware in the seventh meeting between the state’s two Division I football programs. Each of the previous games in the series has been played at UD’s Tubby Raymond Field. The Hornets and Hens did not meet in 2015 after battling the previous four years. DSU is seeking its first win in the series. A member of the Colonial Athletic Association, Delaware was 4-7 overall and 3-5 in conference games in 2015.

The Hornets will play their 2016 home opener on September 10 against Monmouth University. The Hall-of-Fame Weekend contest is scheduled for 5 p.m. at Alumni Stadium. This will be second contest between the Hornets and Hawks. Monmouth won the first meeting 53-21 in 2014. The Hawks posted a 5-6 overall record and 3-3 mark in the Big South Conference last season.

After an open week, DSU will visit the University of Missouri of the Southeast Conference on Sep. 24, marking the third straight year and seventh time in team history that the Hornets will face a major college opponent. The Tigers are coming off a 5-7 overall record and 1-7 SEC mark during the 2015 season.

Delaware State will begin MEAC play the following Saturday (Oct. 1) at Morgan State in Baltimore, Md.
The Hornets will try to snap a three-game losing streak to the Bears, who won last year’s contest 26-6 at DSU’s Alumni Stadium to open up a 35-24 series lead. Morgan State was tied for sixth in the MEAC with a 4-4 league record and posted a 4-6 overall mark in 2015.

The Hornets begin two-game MEAC homestand on October 8 against the Hampton Pirates. Kickoff is scheduled for 2 p.m. at Alumni Stadium. DSU will try to avenge a 21-7 road loss to the Pirates last season. Hampton holds a 27-14 lead in the series after winning the last three games. The 2015 Pirates had a 6-5 overall record and were fifth in the MEAC with a 5-3 mark in the conference.

The Hornets remain home the following Saturday (Oct. 15) to take on the Florida A&M Rattlers in the annual homecoming contest at 2 p.m. This will be the 34th meeting between the MEAC rivals. Florida A&M has won the last two contests, including the 2015 meeting in Tallahassee, Fla. The Rattlers are coming off a 1-10 overall record (1-7 MEAC) last season.

DSU will begin a tough two-game road swing on Oct. 22 at South Carolina State in Orangeburg, S.C., for the 44th meeting between the rivals. The Hornets and Bulldogs have split their last two meetings. SC State (7-4 overall; 6-2 MEAC in 2015) won last year’s contest at DSU’s Alumni Stadium.

The following Saturday (Oct. 29), Delaware State will visit Bethune-Cookman in Daytona, Fla. The Wildcats have won or shared five of the last six MEAC championships. BCU shared the crown with North Carolina A&T and North Carolina Central in 2015. The Wildcats have won the last five games between the teams, although the all-time series is tied at 19-19. BCU has won nine or more games in each of the last four years, including a 9-2 overall record and 7-1 mark in the MEAC last year.

The Hornets return home on November 5 to face 2015 MEAC co-champ North Carolina Central at 2 p.m. The Eagles were 8-3 overall and 7-1 in the conference, including a victory over DSU in Durham, N.C., last season.

Delaware State will wrap up its 2016 home schedule against reigning Black College National Champ North Carolina A&T on Nov. 12 at 2 p.m. The Aggies shared the 2015 MEAC championship with Bethune-Cookman and NC Central, and defeated SWAC champion Alcorn State in the inaugural Celebration Bowl. NCA&T has won the last two games, although the Hornets have an 8-3 lead in the last 11 meetings to hold a 22-21-1 edge in the series. The Aggies had a 10-2 overall record and were 21st in the final STATS FCS Top 25 poll in 2015.

The Hornets will close out the 2016 regular season against its oldest rival Howard University in Washington, D.C. Delaware State captured its lone victory of the 2015 season against the Bison 32-31 in Dover, Del. The Hornets have faced Howard each year since 1958 and a total of 72 times overall. DSU has won 13 of the last 17 meetings, and leads the series 37-34-1.

Delaware State and Howard were each 1-10 overall and 1-7 in the Mid-Eastern Athletic Conference in 2015.

The 2016 season will be the second for Kenny Carter as head coach of the Hornets.