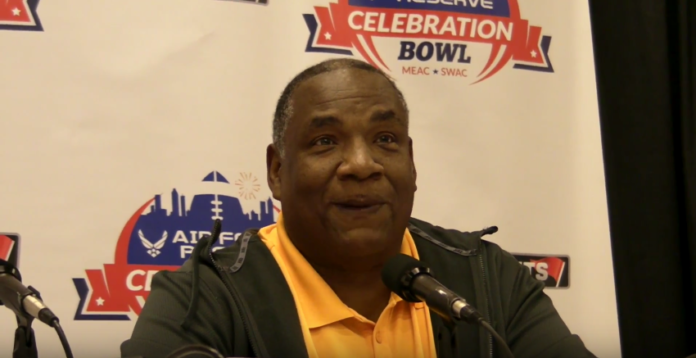 Happy with the results of his team’s 41-34 win over Alcorn State, in the inaugural Air Force Reserve Celebration Bowl, North Carolina A&T football coach Rod Broadway didn’t mince words during the postgame press conference Saturday when asked to provide his thoughts on the MEAC’s decision to give up the conference’s automatic qualifying bid to the NCAA FCS playoffs in order for its champion to compete in the newly created bowl game.

“Well, I was for it all along and I was an advocate for it,” Broadway said. “I was in Division I for 24-years and one of our goals every year was the same, and every team in the country has the same goal, go to a bowl game.

“We’ve had one hand delivered to us, of course we are going to accept it and take it.

“I thought it was a beautiful thing what (MEAC Commissioner Dennis Thomas) did and (Pete Derzis, Sr. VP of ESPN Events) and all those guys, fighting for this thing and getting people in the MEAC to agree to it, because it’s a beautiful experience.

“To me, and this is just my opinion, I’m not speaking for anyone except me. There’s so much more value in this (the Celebration Bowl) than the playoffs for us because we’re not financed to win national championships at this time, but we are … good enough to win this championship.”

“I’m just proud to be apart of it,” Broadway added. “Any push back they got, that’s old news, man. We’re proud to apart of this bowl situation.”