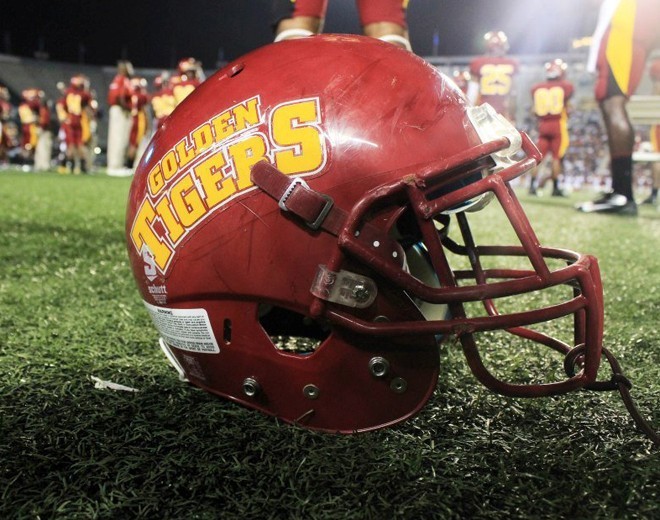 TUSKEGEE, Ala. – For the third straight week, the sixth-seeded Tuskegee University Golden Tigers will hit the road; however, this week the stakes are raised just a bit higher as they are playing for a berth in the national semifinals.

Tuskegee (10-2) travels to face top-seeded West Georgia (11-1) on Saturday afternoon at University Stadium, with kick scheduled for 12 noon (est)/11 am (cst) in the NCAA Division II quarterfinals – or better known as the Super Region 2 championship game.

The two teams are no strangers to one another, as they met last season in the opening round of the NCAA Division II playoffs in Tuskegee. In that game, West Georgia was able to hold off Tuskegee and escape with a 20-17 victory and used that victory to propel themselves to the 2014 NCAA Division II national semifinals.

Tuskegee advanced to the game with a pair of victories over third-seeded Catawaba (26-16) and a last-second victory over second-seeded North Alabama (35-31) last week. In the win over North Alabama, the Golden Tigers led most of the game but needed the final drive to advance to the quarterfinals. Tuskegee marched down the field, converting a fourth down and a third-and-long, which led to a score when Dennis Norfleet took the ball around left end and dove into the end zone with just 19.1 seconds remaining.

West Georgia took a similar path to the quarterfinals; however, the only difference between the two teams is that the Wolves had a first round bye being the top seed. The Wolves needed a last minute drive when quarterback Dallas Dickey scored the game-winning touchdown with just over three minutes remaining to defeat Valdosta State, 27-20.

Norfleet leads the Golden Tigers offensively with 39 carries for 224 yards in the playoffs. He is averaging 5.7 yards per rush and is averaging 112 yards per game in the playoffs this season. For the year, Norfleet has 752 yards on 104 carries and four touchdowns. Meanwhile, quarterback Kevin Lacey has 206 yards rushing, and has passed for 1,859 yards (108-of-244) with 14 touchdowns and 11 interceptions.

Defensively, SIAC Player and Defensive Player of the Year Jewell Ratliff lead the Golden Tigers with 137 tackles (including 59 solo), 13.5 tackles for loss and 2.5 sacks. The senior has also recorded five interceptions, and has three touchdowns this season – two off of interceptions, and one off a blocked field goal.

Meanwhile, Devontae Jackson leads West Georgia in rushing with 910 yards on 126 carries. He has also scored seven touchdowns, and is averaging 75.83 yards game and 7.2 yards per carry. Dickey is the team’s second-leading rusher with 529 yards on 121 carries and four touchdowns.

Dickey has also passed for 1,721 yards (144-of-232) with 17 touchdowns and six interceptions. His favorite target this season has been Shaq Hall with 49 receptions for 500 yards. He has recorded five touchdowns.

Meanwhile, Qa Walker has 27 catches for 526 yards and eight touchdowns for a Wolves offense that is averaging 38 points per game.

Defensively, Dylan Donahue with 11 sacks and 15 tackles for loss, while Alex Armah has eight sacks and Marlon Chapman leads the Wolves with 66 tackles for a defensive that yields just 15.3 points per game.