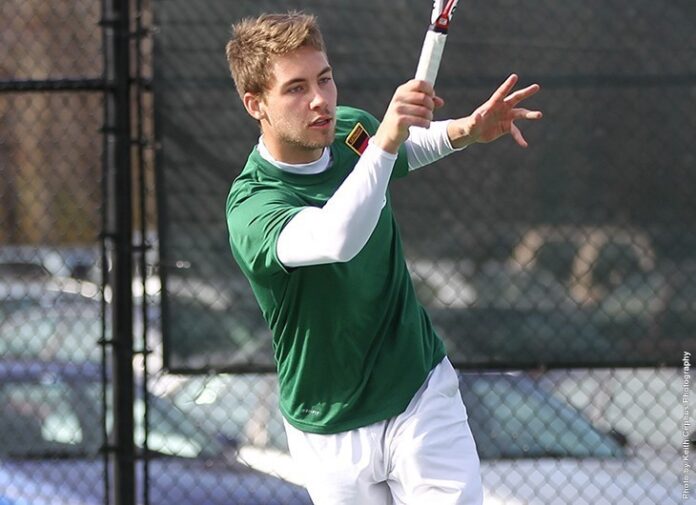 RICHMOND, Va. – The senior trio of Pascal Domnik, Igor Braga and Daniel Grauel won its singles matches to propel the Norfolk State men’s tennis team to a 3-2 win over Delaware during the VCU Invitational.

Domnik won his third singles match this year in the Spartans’ 4-1 loss to Campbell to close out the tournament for NSU at the Thalhimer Tennis Center.

Against the Blue Hens, the Spartans (1-2) won their first match of the year thanks to those three upperclassmen. Grauel actually had the easiest win, a 6-1, 6-1 triumph over Tyler Flematti at the No. 3 singles position. Domnik, at No. 1 singles, earned a 6-1, 6-3 win over Mike Furr.

Braga, at the No. 2 spot, squeaked by Matt Renzi in the first set, 7-5, before a much easier 6-1 win in the second set. Delaware (0-1) earned its points thanks to a default win at No. 4 singles and the victory in the only doubles match. Shane Jeffray and Colin Wong defeated the NSU duo of Terey Hackney and Alex Killam, 8-0.

Domnik made it 3-for-3 in victories on the weekend when he downed Campbell’s Marthinus Visser, 6-4, 6-2.

Campbell also won the No. 4 singles by default and the doubles match by an 8-0 score, with Lorenz Schwab and Landon Rogers defeating Hackney and Killam.

NSU will face East Carolina and UNC Asheville next Friday and Saturday at ECU.

WILMINGTON, N.C.– UNC Wilmington made it a complete sweep on Saturday afternoon, as the Seahawks defeated the Norfolk State women’s tennis team by a 7-0 score to open up the 2015 season for both teams.

The Spartans battled throughout the match, taking several sets both in singles and doubles. But NSU was unable to get over the hump at the UNCW Courts.

Senior Mafalda Lhorca and junior Andrea Macchiavello came closest to winning at No. 1 doubles. They ultimately fell to Annika Sillanpaa and Christine Kharkevich, 6-4. At the No. 2 spot, sophomore Liza Gordeeva and senior Yvonne Kamegne dropped a 6-1 contest to Alyssa Ritchie and Miller Hales.

Gordeeva also had the most success in singles, winning a total of five sets in a 6-3, 6-2 loss to Sillanpaa at the top spot in the lineup. Her doubles partner Kamegne dropped a 6-3, 6-0 decision to Kharkevich at the No. 3 singles position.

Macchiavello competed at the No. 2 slot, falling 6-1, 6-1 to Ritchie. In the other two contested matches, senior Krystal Scott fell 6-1, 6-3 to Alix Theodossiou at No. 4, and Lhorca dropped a 6-3, 6-1 matchup against Hamilton Lovett at the No. 5 singles spot.

Short-handed NSU defaulted at No. 6 singles and No. 3 doubles.

The Spartans will take part in the VCU 4-1 Invitational next Friday through Sunday, playing in four matches over those three days.

LYNCHBURG, Va. – The North Carolina Central University women’s tennis team opened the spring campaign with a near upset of Wofford College on Saturday and a 6-1 loss at Liberty University on Sunday, both matches played in Lynchburg, Va.

On Sunday, Muamba beat Mariely Hassey of Liberty (6-3, 6-2) for the lone point by the Lady Eagles.