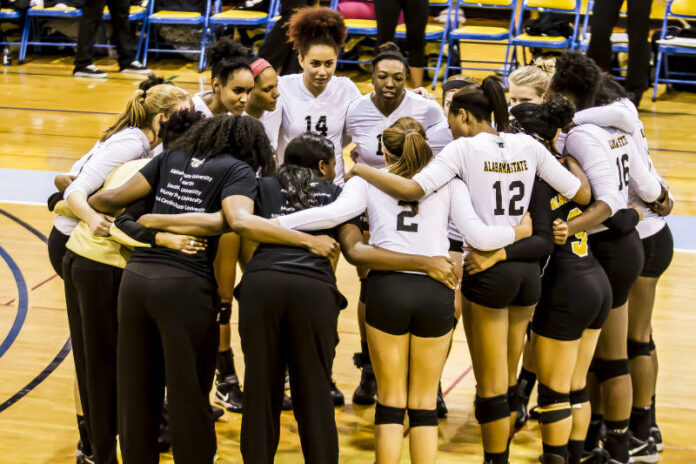 Alabama State will play Florida in the first round of the NCAA Women’s Volleyball Division I Tournament, tonight at 7 p.m. EST at the O’Connell Center in Gainesville, Fla.

This is the second year in Alabama State history that the Hornets have made it to the NCAA Championship, under head coach Penny Lucas-White. The Hornets (20-18) will be hosted by the Gators (25-3) who collected the eighth national seeding. Each team went undefeated in conference play this season with ASU holding an 8-0 record in the Southwestern Athletic Conference and Florida producing an 18-0 record in the Southeastern Conference.

Florida enters the 2014 NCAA Tournament having notched its 24th consecutive 25-win season. The Gators downed No. 3 Texas in Austin to cap of the regular season at 25-3 overall after going an undefeated 18-0 in SEC play to claim the program’s 21st SEC Championship. Florida’s undefeated SEC season was its 13th in school history.

The regional winners will advance to the semifinals and final hosted by the Big 12 Conference and the Oklahoma City All Sports Association at Chesapeake Energy Arena in Oklahoma City on December 18 and 20. Both national semifinal games as well as the championship game will be broadcast by ESPN2.