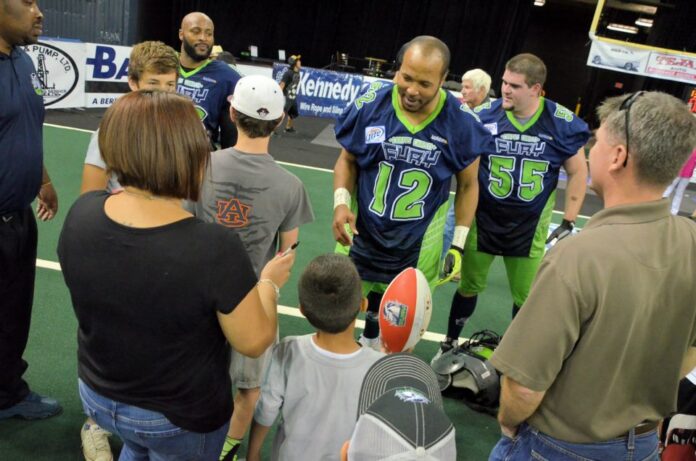 The football record books at Jackson State are filled with the accomplishments of former quarterback Robert Kent.

During his stellar four-year career at JSU, Kent threw for 11,797 yards (then fourth all-time in FCS history), 104 touchdowns and set a host of other individual and team records.

After his stint at JSU, Kent had a cup of coffee in the NFL before playing for several indoor football league teams.  At one point, he was cast as the body double for Dwayne Johnson’s character during scenes in the movie “The Game Plan.”

Kent, three-sport star in high school, caught up with Rod Walker of  the Mississippi High School Activities Association to reflect on his time at JSU, his life and the 2014 team.

RW: You played three years under Hughes, then James Bell took over as coach and changed JSU’s offense, and your numbers dipped. When you look back at your senior season, are you bitter about it?
RK: At times, I became bitter. I looked at the situation. I went from being one of Mississippi’s best players for three years in a row, and then that last year we bring someone in who doesn’t know the tradition as far as the school and what we like to do. We went from leading the nation in offense and scoring to not even being a factor in our own conference. It became bitter. I could’ve left and gone somewhere else to finish up. But loyalty is one of my biggest things. I hate I couldn’t finish what Judge (coach Hughes) and the crew had started. Coach Bell would talk about working with coaches in the NFL, but we needed that blood, sweat and tears that coach Hughes and his coaches had. He didn’t do that for us. We fought for coach Hughes to the end. That last year was my time to since, but it seems like that light got sucked away from me.

RW: Do you think you would have reached the NFL if it wasn’t for that senior season?
RK: I’ll say yes, just because of that spotlight we had on us for those first three years. We had Sylvester Morris and Rashard Anderson going in the first round my first year and guys like Destry Wright that came behind. I had never seen so many scouts in my life my first few years. It was unbelievable. For them to know what we were doing and fans coming to see us. That last year just took the whole air out of the balloon. You could see the fans declining because the excitement was gone.

RW: Have you kept up with Jackson State much this season?
RK: Yes, I checked up on them the other day. I saw we let Valley beat us on homecoming and we have Alcorn coming up. It’s not a good feeling right now. We are used to being on top. It hurts. I still bleed the blue, so it hurts to see us losing to the teams we used to beat.

Kent was last listed as the quarterback for the Corpus Christi Fury of the Ultimate Indoor Football League, where he led the league in rushing and passing in 2013.