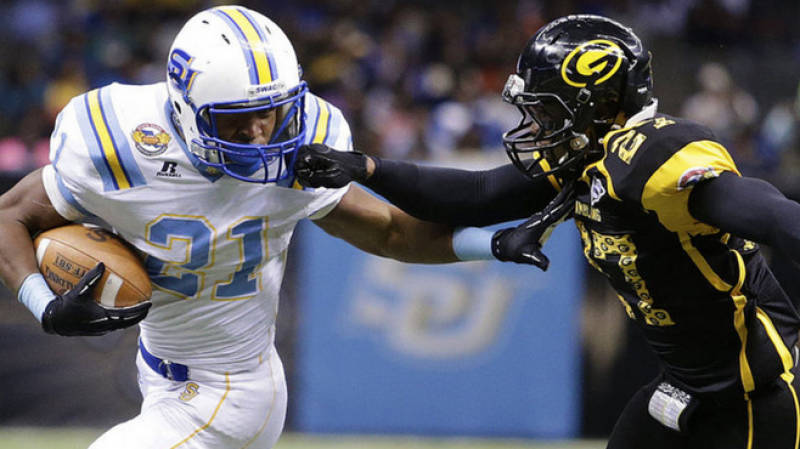 Southern’s freshman quarterback Austin Howard has led the Jags to the brink of a division championship.


Admit it.  A lot of the luster had come off of the Bayou Classic.  In recent years it’s looked like there were more people in the streets of the French Quarter than in the seats of the Superdome.  Both teams have struggled recently and even before Grambling’s disastrous 2013 season which included: three coaches, a boycott, a forfeit, a lawsuit, and national attention unlike any the most famous program in Black college football had ever received; there was talk that the school that has produced more than 100 NFL players  could be removed from the game it helped make famous.

This year, everything is different.

Southern University is 8-3 and more importantly 7-1 in the Southwest Athletic Conference (SWAC) West Division.  Head Coach Dawson Odoms has proven to be the perfect choice to turn around a program that had been floundering under former Jaguar great Stump Mitchell.  Odoms is 17-7 in the last two seasons and he led the Jags to a Bayou Classic win, the West Division and the SWAC title in 2013.  He has his team in position to do that once again.

The running game is powered by Lenard Tillery.  Tillery, a sophomore from Baton Rouge, should eclipse the 1000 yard barrier in the first half of the classic.  He comes in averaging nearly six yards per carry and has crossed the goal line seven times so far this season.  Freshman quarterback Austin Howard isn’t the most accurate passer (51.1 percent), but he’s minimized his mistakes (2:1 TD to INT ratio) and has Southern Averaging 33.5 points per game, good for third in the SWAC.

Defensively is where Southern has struggled, which can’t please the hard-nosed Odoms.  The Jags are giving up 31.1 points per game and a big reason for that is there porous run defense.  Southern has allowed 1964 yards on the ground this season.  They are only slightly better against the pass, finishing seventh in the conference in Pass Defense Efficiency.  And to be bad in the SWAC defensively is to be pretty bad.  Only three teams in the conference allow fewer than 400 yards per game.  By comparison, of the 14 teams in the SEC, 9 hold their opponents under 400 yards per game.

This brings us to the Grambling Tigers.  The Tigers couldn’t have wished for a better start for coach Broderick Fobbs.  The Grambling alum walked into a disaster and has created a resounding triumph.  In the preseason Grambling was picked to finish last in the SWAC.  And why not?  They had won a grand total of two games in the previous two years.  But Fobbs has brought the program back together.  After an 0-3 start that included losing their first two games by a combined score of 27-89, the Tigers find themselves 7-4 and tied with the Jags at 7-1 atop the West Division standings.

Grambling’s head coach Broderick Fobbs has taken his alma mater from disaster to entering the Bayou Classic with a chance to win the West Division title and a bid to the SWAC Championship.

A glance at the numbers will give you no clue as to how the Tigers are winning.  They don’t have a running back who has gained more than 500 yards all season.  The get outrushed by nearly 30 yards a game.  They are a good passing team now that junior Johnathan Williams has taken over at quarterback, but they’ve only thrown 19 touchdown passes all season.  Grambling is scoring 31 points per game, but they are giving 30.5 right back.

The greatest thing the Tigers have done so far is win.  The winning started healing at Grambling and the winning has helped restore pride for the team and in many ways the school.  Sure, across this nation football is an obsession but there may be no other school so directly tied to or known by its football program than Grambling.  I cannot imagine how anyone in that conference other than Fobbs wins coach of the year.

Though, I can’t imagine any of that matters right now on the Bluff or up in North Louisiana.  But the Bayou Classic matters.  Not because of the history.  Not because of the parties.  It matters because a division title is on the line and a shot at the SWAC title.  We’ve seen it time and time again, when the teams are good; the bands, the food, the laughs, the rivalry is better.  This is the Bayou Classic that we’ve been waiting a few years for.

This is Grambling versus Southern.

David M. Grubb is a public relations/sports information professional and occasional sportswriter. Currently, he operates DG Communications, a small public relations and branding agency where he works with the Gulf Coast Athletic Conference (the only conference comprised entirely of HBCUs in the NAIA), Dillard University, and several other organizations.  He is also an active sports blogger, with his own blog, and for SportNOLA.com, the second largest site for sports content in the state of Louisiana.  You can also catch him as fill-in host of “Sport-a-facts” on WBOK 1230 AM in New Orleans.