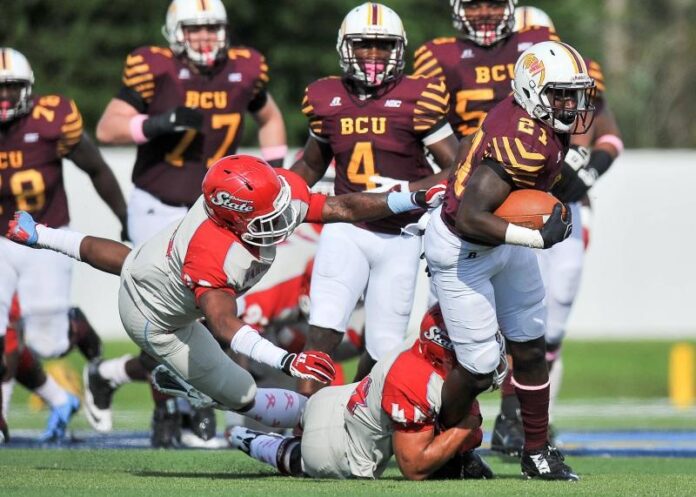 DAYTONA BEACH, Fla. – No. 17 Bethune-Cookman zoomed out to a quick 21-0 lead and took its Mid-Eastern Athletic Conference opener with a 27-7 over Delaware State Saturday at Municipal Stadium.

Quentin Williams threw for 198 yards and two touchdowns, and Michael Jones rushed for 132 yards as the Wildcats (4-1 overall, 1-0 MEAC) downed the Hornets (1-5,1-1) for the fourth consecutive time dating back to 2009.

The Wildcats capitalized on Hornet punting miscues to put three touchdowns on the board in the first 11 minutes.

Leroy Holt registered the first B-CU touchdown when he caught a blocked Delaware State punt in the Hornet end zone two minutes into the contest.

Short punts allowed the Wildcats to start their next two possessions inside Hornet territory, and Williams led the offense on two scoring drives that produced touchdown passes of 26 yards to Jhomo Gordon and a 15-yarder to Jones out of the backfield.

Williams completed his first seven passes to extend his streak of consecutive passes without an interception to 123, but on attempt 124, Delaware State defensive back Terrick Colston picked off Williams in the flat for an 11-yard score that narrowed it to 21-7 with five seconds left in the opening quarter.

Bethune-Cookman outgained the Hornets 435-168 in total yards, but struggled to punch the ball in during the middle quarters. Four possessions inside the Hornet 30 failed to produce points.

The defense kept the Hornets at bay, not allowing a third down conversion in 14 tries.

Gordon led Wildcat receivers with seven catches for 81 yards. Jordan had three catches for 21 yards to complement his rushing, which included a season-long 51-yarder in the opening quarter.