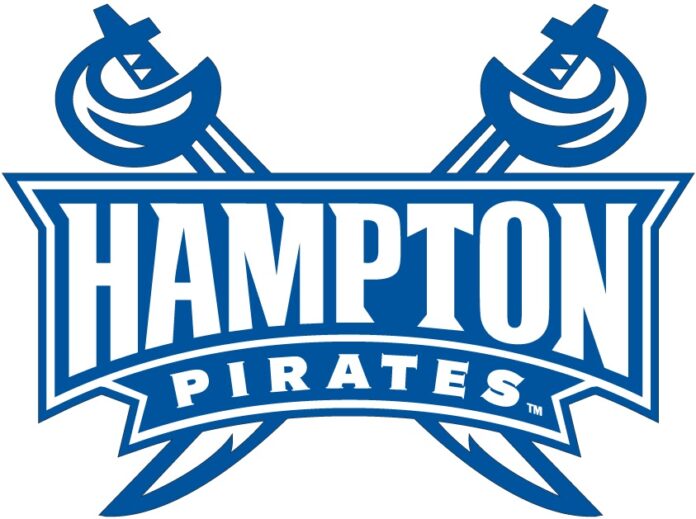 The win was the first in the tenure of head coach Connell Maynor.

Bailey (Woodruff, S.C.) threw for a career-high 267 yards and three touchdowns, completing 20 of his 31 passes. Redshirt sophomore Rashawn Proctor (Hampton, Va.) caught six of those passes for a team-high 69 yards and a touchdown. In all, Bailey found nine different receivers.

Senior Jorrian Washington (Los Angeles, Calif.) rushed for a team-high 92 yards and a touchdown on 14 carries, averaging 6.6 yards per rush.

Miles (1-2) scored the only touchdown of the first quarter, a 16-yard pass from Demetric Price to Antonio Pitts that gave the Golden Bears a 7-0 lead at the 4:56 mark.

But the Pirates answered with 10 unanswered points in the second quarter, starting with an 8-play, 75-yard drive that ended with a 23-yard field goal from sophomore Anthony Prevost (Chesterfield, Va.) to cut the lead to 7-3 with 7:15 left in the half.

Hampton took a 10-7 lead with 3:47 left in the half after Bailey found senior Morris Brailsford (Westbury, N.Y.) from 19 yards out for his first scoring toss of the night.

The Pirates took that lead into the half.

Miles answered on its first possession of the second half, going 52 yards on 10 plays before Jason Coste hit a 42-yard field goal to tie the score at 10-10 at the 10:43 mark. It was his first field goal of the night after missing two tries in the first half.

But the Pirates answered immediately, marching 66 yards in nine plays to set up a 1-yard run up the gut from Washington. Washington had four carries in that drive, including a 24-yard scamper on a 3rd-and-1 that crossed midfield.

Jamarcus Hill scored on an 8-yard run with seven seconds left in the third quarter to tie the game at 17-17.

But on the first drive of the fourth quarter, Bailey led the Pirates down the field – starting with a 19-yard strike to Washington. Later in the drive, Bailey hit a leaping SeQuan Gooding (Chesapeake, Va.) over the middle for an 18-yard touchdown – after Gooding fought through a pile across the goal line.

Miles needed just three plays and 56 seconds to answer, cutting the Pirates’ lead to 31-24 after Price found Pitts from 25 yards out with 8:30 left to play. The Golden Bears’ momentum appeared to continue after a Bailey interception, but Miles turned the ball over on downs with 2:47 left.