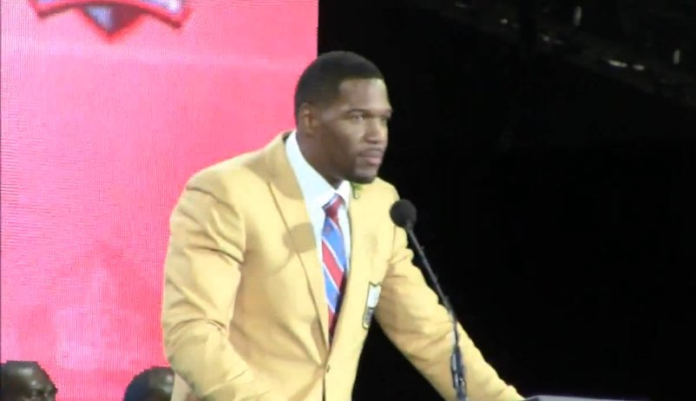 How can person encapsulate a life, a career, all the people that helped him achieve untold riches and fame if given the audience of millions?

How can anyone alive do so with the restraint of time casting an impatient shadow with television cameras staring them in the face?

Strahan spoke about his life before football burrowed it’s way in as the big-boned kid growing up in Germany who was teased by his peers and siblings for having a larger than normal butt for a boy his age.

The one-time NFL Defensive Player of the Year spoke about being shipped to Houston to live with his uncle, a longtime pro football player himself, with the encouragement of his father to teach the young Strahan the game.

He quipped about playing in New York with everyone from Lawrence Taylor to Eli Manning. He was fun. He was eclectic. He was every bit the gap-toothed television personality America’s middle-class families have grown to love.

Buried in the middle of Strahan’s ode to his parents, children, agents, teammates and coaches was the time he spent at Texas Southern.

“The improbable happened,” he said. “I got a scholarship from Texas Southern University.”

“It was perfect for me. I didn’t get swallowed up,” Strahan continued. “I had coaches who loved me and cared about me. The thing I learned the most at Texas Southern is that I had to grow up.”

For some people associated with Texas Southern and HBCUs, these statements were not enough to satisfy their endless thirsty for school pride validation.

Many wanted the grandiose display of fellow SWAC Hall of Famer Aeneas Williams, whose impassioned address before Strahan’s dripped with references and antidotes to Southern University.

Fandom is very selfish and needy, man. We want these athletes — from the time they’re children entertaining us wearing jerseys with the names of our ‘hood, city, state and school emblazoned across them — to belong to us forever even when they’re retired and are no longer wearing the jersey.

How soon we forget that Strahan has often paid homage to Texas Southern on the Fox NFL Sunday football show and Live with Kelly and Michael.

When Strahan earned his master’s degree, he shared that experience with the world on the popular morning show. Texas Southern was the backdrop.

While it can be understood that a famous alum — whoever he or she is — represents that school perpetually, those four or five years are only a small part of their lives with all due respect. It is only a slice of all our existences.

Not everyone wants to bleed the colors all the time. Not all athletes care about the school or the team the same way we do. They just can’t. We shouldn’t demand it. To be engulfed in that world is to be submerged in state of being that is wrapped in fantasy.

The star athlete has more important things to be concerned with; his family, his finances, and how to function in a world that is no longer consumed by brief career public failures and successes on a field.

The criticism of Strahan seemingly not showering Texas Southern with a certain amount of love in Canton only is a microcosm of how obsessed we can be with all of this.

To be disappointed that a man didn’t spend enough time sharing a portion of his life with us when he didn’t have to in the first place.

Somehow failing to provide that proper barometer of school acknowledgement from person like Strahan is seen as slight to the worth of that university and to the all the people who matriculated through it.

If that’s the case, then maybe we should learn to love ourselves more than expecting a 260-pound retired football player to do it for us.