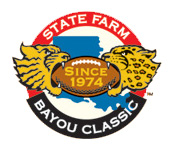 New Orleans, LA – The highly-anticipated rivalry between the Grambling State University Tigers and the Southern University Jaguars is set for November 27. Each year, four to five million viewers watch the play-by-play drama of the State Farm Bayou Classic® on NBC and 60,000 fans fill the New Orleans Superdome. This year, the Classic celebrates a 20-year partnership with NBC Universal and the 15-year anniversary of the State Farm Insurance title sponsorship. These relationships have propelled the Bayou Classic to more than just a game. Through enrichment programs like the Super Job and HBCU College Fair, NBC Internship programs with Grambling and Southern University students and the annual playground build, the Bayou Classic has contributed to important economic development and rebuilding of New Orleans in the years prior to and following Hurricane Katrina.

“Bayou Classic is so much more than a game and we are thrilled to celebrate our 15 years as sponsor,” said Pam El, State Farm Marketing Vice President. “This game brings more than 250,000 people to the city of New Orleans on Thanksgiving weekend generating vital revenue for the city.  And with community focused efforts like our annual playground build, our agents and volunteers are able to give thanks and give back to the people of New Orleans.”


“We are very proud of our association with the game and thrilled to be celebrating the 20th anniversary of the Bayou Classic on NBC. The Classic is a slice of Americana that is now synonymous with Thanksgiving weekend and provides four hours of great entertainment for our viewers,” said Gary Quinn, Director of Business Development for NBC Universal. ”We’re also very proud of our partnership with Grambling and Southern and our title sponsor State Farm. Both the schools and State Farm have proven annually that this is more than just a football game, it’s also about giving back to New Orleans and the local and regional communities in the state of Louisiana.”

The State Farm Bayou Classic is the complete entertainment package. Tune into NBC at 1 p.m. on November 27 as the Tigers and Jaguars battle to break the 18-18 Bayou Classic tie.