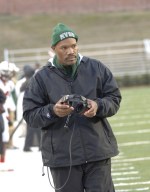 ITTA BENA, Mississippi – The Mississippi Valley State University Department of Athletics announces today that Willie Totten has resigned as head football coach of the Delta Devils football program. His resignation as coach to pursue other opportunities will be effective immediately as he has been reassigned to other University duties.

Totten has been the head coach since the 2001 season. He guided the program to the best turnaround in Division I-AA in 2002 when the Delta Devils went 5-6 after an 0-11 campaign. He also took the team to back-to-back six-win seasons in 2005 and 2006.


“We thank (Coach) Totten for nearly a decade of loyal service and commitment as the head football coach of the Delta Devils,” said interim director of athletics Donald R. Sims.

Because of his dedication to MVSU, Totten is being asked to stay on at the University in a different capacity. He will continue to serve as a faculty member of the health, physical education and recreation department while assisting as an advisor for the MVSU Men’s College. He also will be responsible for fundraising as well as the establishment of an athletic foundation.

A nationwide search for a head football coach will begin immediately. No timetable has been established for that decision.