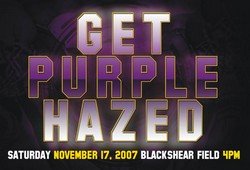 Prairie View fans are ending the 2007 football campaign with a purple bang. A group of PV faithful in conjunction with the THG Agency (a TSPNsports.com partner) are encouraging those who will be attending PVâ€™s home finally against Alabama A&M to purchase â€œPurple Hazeâ€ T-shirts. The effort serves as a fundraiser for the PV athletic program.

Here is the official release from the THG Agency.

The Black Panther Party,’ a group of Prairie View alums that support and talk Prairie View athletics on www.TSPNSports.com , website with the expertise of THG Agency, LLC have found a way to help the football team by planning a “Purple Haze” of the stadium during the last home game against Alabama A&M University on Saturday, November 17, 2007.

The `Three “P” Tailgaters’, a tailgating crew who usually tailgates during all home games have also agreed to be a part of the `Get Purple Hazed!” event.

The “Get Purple Hazed!” is a small fundraiser for the Prairie View A & M athletic department, but it is also a great way for the school and the community to show support for the Panther football team, which is in the midst for its first winning season in 31 years, by wearing `Purple Haze’ shirts in the stands.

A season ticket holder and one of the founders of Three â€œPâ€ Tailgatersâ€Ÿ Raymond Holley has been tailgating at home games and sees the event as a winning idea for everybody.

“When the football team looks up and sees the stadium filled with purple it should be huge momentum boost for the guys. “It lets them know how much the community and school appreciates them. It’s a big game and hopefully we can generate some enthusiasm that night.”

Another booster and season ticker holder, Roosevelt Huggins said, “We would like to see this become a tradition for not only a football game, but other sports as well, that each year one football game and one game in other varsity sports are specifically designated as a `Purple Haze’ event.”

â€œThe athletic department has tried to implement such a marketing venture in the past and I am thankful to Three P Tailgaters, THG Agency and individuals involved in supporting the â€žGet Purple Hazed!â€Ÿ initiative. The venture shows the team spirit and school spirit that has always been a staple of the school,â€ Prairie Viewâ€Ÿs athletic director Charles McClelland said. â€œI anticipate everyone participating in the â€žPurple Hazeâ€Ÿ event and I hope the entire Blackshear Stadium is in purple.â€

“Here at THG Agency, LLC, as a sports consulting company, we are proud to be connected with `Get Purple Hazed!’ and Prairie View Athletics and have our name linked with a great institution,” says President and CEO, J. Kenyatta Cavil. â€œI saw it as a perfect opportunity to work with Charles and the executive team viewed it as a way to give back to our school.â€

“We decided to support the event started and we hope with community support it becomes a great tradition for the school,” said Kenyatta.

Fans and students can stop by the Prairie A & M University Athletic Department during the week to purchase shirts and as well as during the Pep Rally on Friday.

Shirts will also be sold the day of the game this Saturday. Shirts are $10 for students, $15 for alums and for those that want to purchase them through a mail option at info@thg-agency.com, through PayPal. Alums that are not able to make the game also have an option to purchase their own t-shirt as well as donate a t-shirt for a student to wear at the game for $20.For more information you can contact J. Kenyatta Cavil at 281.330.1341 . Look for the `Three “P” Tailgaters’ and THG Agency, LLC to recreate the event during the basketball season.

-Proceeds gained from the `Purple Haze’ t-shirt sales go to fund several different areas including, Prairie View’s athletic department interest. Another part towards an organization on campus that helps facilitate the sale the shirts.