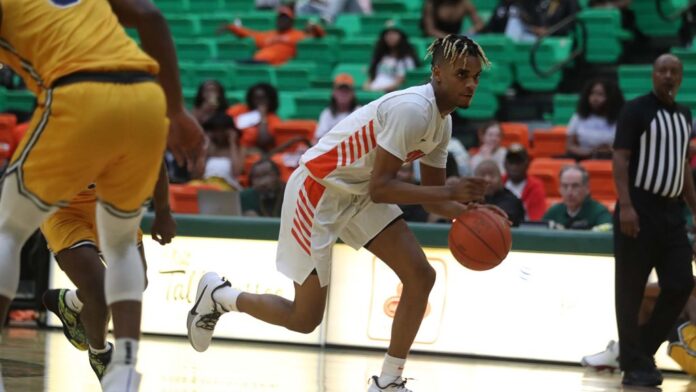 DAYTONA BEACH, Fla. — Morgan State fell behind by 13 in the first half at Bethune-Cookman and battled back to eventually take the lead in the final minutes. However, a clutch 3-pointer by Leon Redd proved to be the separation the Wildcats needed to end the Bears upset bid with an 85-78 win Monday night at Moore Gymnasium.

Cletrell Pope showed why he was selected the MEAC Preseason Player of the Year. The 6-foot-9, senior forward finished the night with 29 points (9-11 FG) and had 18 rebounds and four steals.

Morgan State (8-11, 2-2) had four players in double digits, including Troy Baxter who played 36 minutes and finished with 22 points on 7 of 13 shooting and led the Bears with seven rebounds. David Syfax came off the bench and scored 16 points and was 4 of 5 from 3-point territory. Stanley Davis added 12 points and Sherwyn Devonish-Prince had 10.

Morgan State led, 6-2 early on, but the Wildcats reeled off a couple of baskets to give the Wildcats a 9-6 advantage with 14:29 remaining in the first half.

Jordan Preaster scored 7 points to ignite a 10-4 run to give the Wildcats its largest lead of the half at 39-22.

Troy Baxter hit a 3-pointer in the closing seconds to trim Bethune’s lead to 45-32 at halftime.

Dover, Del. (Jan. 13, 2019) — Delaware State trailed by three points early in the second half but failed to get over the hump in a 98-77 MEAC men’s basketball loss to North Carolina A&T in Memorial Hall Monday evening.

Andre Jackson led five NCA&T double-figure scorers with 20 points on 10-for-20 shooting from the field, including three three-point field goals.

Fred Cleveland and Andre Jackson added 13 points each for the Aggies, who won their sixth straight over the Hornets and fourth in a row this season to improve to 7-11 overall and 3-0 in the MEAC.

The loss overshadowed another solid performance by Hornet guard John Crosby, who led all players with 28 points on eight-for-14 shooting from the field, including four three-point field goals (4-9) and eight free throws in 10 attempts.

Crosby topped the 20-point mark for the 10th time in DSU’s 17 games to raise his MEAC-best scoring mark to 22.1 points per game this season. He was ninth among all NCAA Div. I players in points-per- game entering the contest.

NCCU and MDES (2-16, 1-2 MEAC) played a tightly-contested first half as both teams stayed within close range with each other, until the Eagles were able to stretch out a 10-point lead. However, the Hawks were able to generate a 7-0 run to close the first half and cut the deficit to three with the Eagles leading 28-25 at the intermission.

MDES was able to make a late comeback in the second half thanks to strong shooting from Ahmad Frost (Cincinnati, Ohio) who scored 11 points, all in the second period along with three three-pointers. Frost was responsible for a driving layup with time winding down in regulation to tie the game at 59.

TALLAHASSEE, Fla. — MJ Randolph finished with a double-double as the Florida A&M University men’s basketball team completed its home sweep with a 65-54 victory over Coppin State in a Mid-Eastern Athletic Conference (MEAC) game on Monday night during Faculty and Staff Appreciation Night

The Rattlers (4-11 overall, 2-2 MEAC), who defeated Morgan State on Saturday afternoon, led by as many as 15 points (26-11) with 45 seconds left in the first half and held Coppin State to just five field goals (17.9 percent), while taking a 27-13 advantage into the break. Florida A&M never trailed in the second half in picking up its second consecutive conference victory.

Randolph finished just one point shy of his career-high with 21 and posted a career-best 15 rebounds, along with a game-high six assists to pace FAMU. Evins Desir added 13 points and four rebounds, while DJ Jones tallied 10 boards, three points, two steals, two blocks, and one assist.