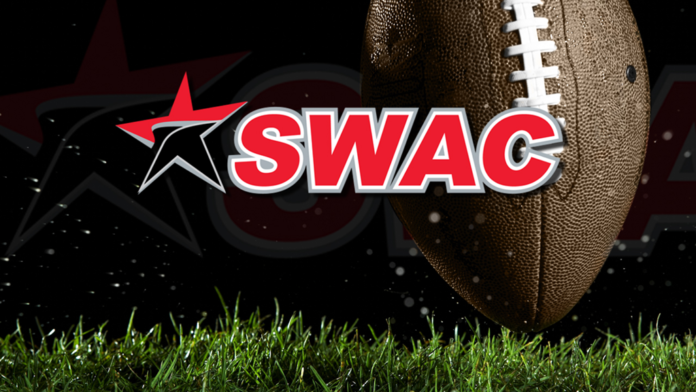 BIRMINGHAM, Ala. – Alabama A&M’s Jordan Bentley, Jackson State’s Keonte Hampton, Alcorn State’s Malik Holbert, and Corey McCullough along with Alabama State’s Colton Adams were all named Southwestern Athletic Conference (SWAC) Football Players of the Week in week nine of the season for their outstanding play the league announced on Monday.

Co-Defensive
Alcorn State
Malik Holbert (6-0, 235, Jr., DL, Flowood, Miss.)
Holbert became the first Brave to wrap-up three sacks in a single game. He did so Saturday in Alcorn’s 27-13 win over Southern to help keep the Braves unbeaten in SWAC play. Holbert also recorded five tackles and was a part of a defense that limited the Jaguars to just 13 points.

Specialist
Alcorn State
Corey McCullough (5-11, 175, Sr., P/K, Louisville, Miss.)
McCullough connected on a pair of field goals and totaled nine points in Alcorn’s 27-13 win over Southern on Saturday. He was 2-for-2 in field goals as he converted from 37 and 31 yards, respectively. McCullough also punted twice for a 41.0 average including placing one punt inside the twenty yard-line.

Newcomer
Alabama State
Colton Adams (6-2, 220, Fr., LB, Wetumpka, Ala.)
Adams led Alabama State with a game-high 13 tackles in a triple-overtime loss to Alabama A&M in the Magic City Classic. He finished with five solo stops, and also recorded 2.5 tackles for loss. The freshman forced a fumble and recorded one quarterback hurry, as well as having three knockdowns of Alabama A&M’s quarterback. The freshman has played in three games this season, after missing the first four, and has led the Hornets in tackles each week.