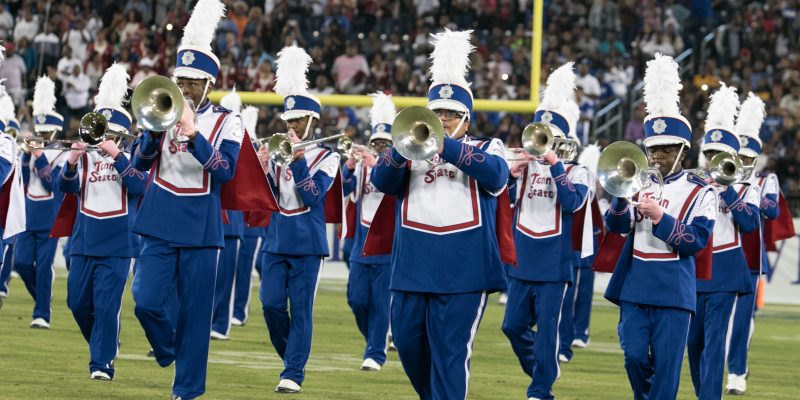 NASHVILLE, Tenn. – The Tennessee State University Aristocrat of Bands will be front and center Sept. 15 when the Atlanta Falcons take to the field in their season home opener against the Philadelphia Eagles.

The marching band has been invited to perform at half-time of the Falcons-Eagles game in the Mercedes-Benz Stadium in Atlanta, the second AOB NFL invitation this season. The band will also perform during the half-time show of the Tennessee Titans-San Francisco 49ers game at Nissan Stadium on Oct. 6.


For Atlanta native Julien Dooley, a drum major with the AOB, performing in his hometown, especially in the Mercedes-Benz Stadium, is special. He knows his family will be thrilled, but he plans on surprising them.

“I have not told anyone yet, but this is just so exciting,” said Dooley, a senior commercial music major and a graduate of Atlanta’s Southwest DeKalb High School, who also plays trombone for the AOB.

“I am a huge fan of the Atlanta Falcons. It is very exciting that the AOB gets the opportunity to perform for the Falcons, which means I get to go back home, something I rarely get to do because of our busy band schedule.”

Dr. Reginald McDonald, TSU’s director of bands, said he received the Falcons’ invitation last week, with a choice to perform at any one of their next three home games. The band performs at the Southern Heritage Classic in Memphis between TSU and Jackson State University on Saturday, the day before the Falcons game in Atlanta.

“Our preference was the Sunday after the Southern Heritage Classic. Needless to say, that’s going to be an extremely busy weekend for us again,” he said, noting the band’s back-to-back performances at the John Merritt Classic on Aug. 31 in Nashville, and the Battle of the Bands competition in Houston the following day.

“One thing we learned last week that even after the John Merritt Classic our kids did a great job. We got on the bus and drove 14 hours to Houston. The show in Houston was even better than the one we did Saturday night. So, we know that our kids are performers and they will rise to the occasion.”

McDonald, who previously performed for the Falcons as a high school band leader at Southwest DeKalb (1999 playoffs – Falcons vs. 49ers) said going to Atlanta is also personal and special.

“That was a huge moment in my career as a young man, and to have that opportunity 20 years later as a college band director, is even more significant,” said McDonald. “This is a market where we get a lot of our band kids from. The majority are from Memphis and West Tennessee, the next largest group – 30 percent – of our kids come from the Atlanta area, and those connections that I have with band directors from Atlanta and the school system are tremendous.”

Sophomore Tiara Thomas, a political science major from Olive Branch, Mississippi, plays the French Horn in the AOB. She said the invitation to Atlanta gives band members the chance to play in another NFL arena away from home.

“I am really excited because normally (since she came to TSU) we only perform for our home NFL team – the Titans,” said Thomas, a member of the TSU Honors College, with a 3.9-grade point average. “So, to be invited to a whole other state to showcase our talent, that’s really big.”

The Aristocrat of Bands made global headlines last week when Lizzo, a rising star topping the charts with her hit “Truth Hurts,” gave a shout out to the band. During the halftime of TSU’s game against Mississippi Valley State at the John Merritt Classic, the AOB included Lizzo’s “Truth Hurts” in its medley. They also delivered a repeat performance the following day at the National Battle of the Bands in Houston, Lizzo’s hometown.

By HBCU Sports5 days ago
Bands