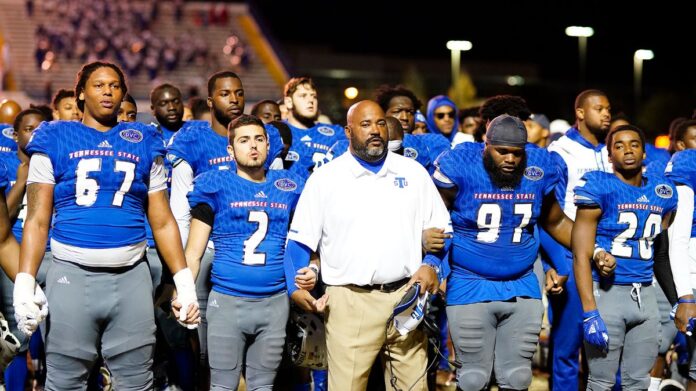 NASHVILLE – Tennessee State was picked to finish fifth in the 2019 Media Ohio Valley Conference Preseason Football Poll, as announced on Friday. The Tigers finished fifth a season ago and looks to improve on a campaign in which they played just nine games.

Jacksonville State received all 15 first-place votes to claim the title as preseason favorite. The Gamecocks shared the 2018 regular-season championship with Southeast Missouri. The Redhawks were picked to finish second, ahead of Eastern Kentucky and Austin Peay. UT Martin, Murray State, Eastern Illinois, and Tennessee Tech were tabbed to follow the Tigers.


TSU returns eight starters on offense and seven on defense, as well as Antonio Zita at Kicker, Kaleb Mosley at Punter and long snapper Thomas Newberg. Last year, injuries hampered the Tigers throughout the season, allowing just 24 players to see action in all nine games with only six starting every contest. The 2018 unit sported 54 players who missed action during the season due to the injury bug. Notable players to miss time were starting quarterback Demry Croft, preseason Ohio Valley Conference selections Thomeas Burton (center) and Steven Newbold (wide receiver), as well as linebacker Christion Abercrombie, cornerback Nick Harper Jr. and the Tigers leading rusher from the previous season, Sabree Curtis Jr., who went down during the first series of the opener. Curtis did not return until the final game of the year.

Despite the obstacles, the Big Blue offense saw a 105 yard per game increase in total yardage from the previous season, averaging 431.3 yards in 2018, which ranked 20th in the country in passing and 31st in total offense.