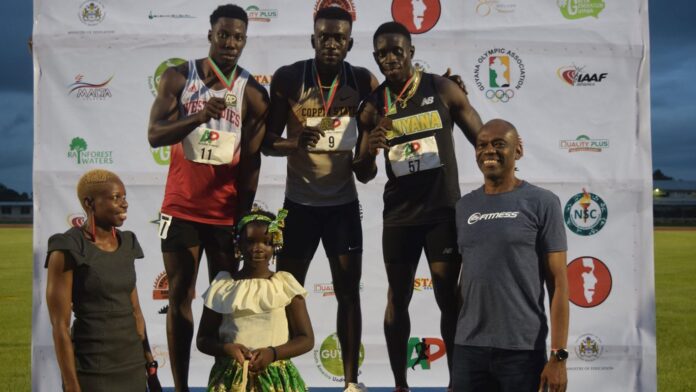 GEORGETOWN, GUYANA – Coppin State’s Joseph Amoah was victorious against an international field in the Guyana Olympic Association 100m dash at the Aliann Pompey Invitational on Saturday with a time of 10.20.

A native of Greater Accra, Ghana, Amoah clocked a 10.40 in the preliminaries to defeat all competitors, before beating out a trio of competitors from Guyana (Emanuel Archibald, Winston George, Jeremy Bascom) to win the Gold in the Finals.


Amoah has already qualified for the 2019 World Championships in Doha, Qatar and 2020 Tokyo Olympics in both the 100m and 200m dash, and he is also set to run in the African Games, held in Rabat, Morocco, later this summer. Amoah owns the Ghanaian record in the 200m dash (20.08) and owns a personal-record of 10.01 in the 100m dash, becoming the fastest Ghanaian sprinter in the last 24 years.

The Aliann Pompey Invitational is the premier international track & field competition in Guyana, South America. In its first year of existence, the competition hosted 11 athletes who went on to compete at the 2016 Olympic Games in Rio. The Invitational is named for Aliann Pompey, a sprinter who specializes in the 400m dash and who represented Guyana at the 2000, 2004, 2008 and 2012 Summer Olympics.