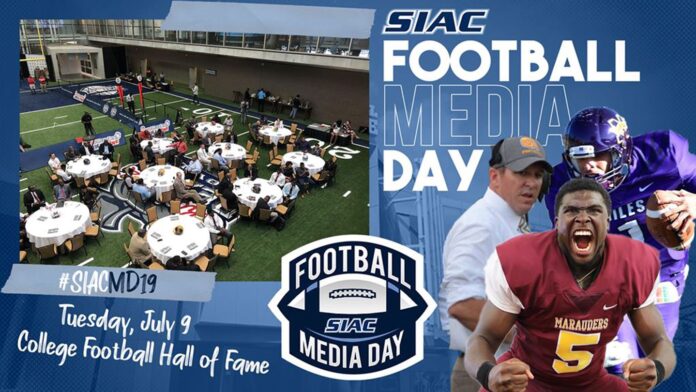 ALBANY, Ga. – The Southern Intercollegiate Athletic Conference (SIAC) is excited to announce that it will return its annual Football Media Day on Tuesday, July 9 to the College Football Hall of Fame and Chick-fil-A Fan Experience in Atlanta for its third consecutive year.


“The College Football Hall of Fame and Chick-fil-A Fan Experience was built to serve as the home for and celebrate all things college football – players, coaches, teams, conferences, and fans,” said Dennis Adamovich, CEO of the Hall. “We are the perfect venue for important events like this and we are thrilled to welcome the SIAC here to host their Football Media Day.”

This event will feature head football coaches and two student-athletes from each team that will be available for interviews and will have the opportunity to share their expectations and views on the upcoming football season. The predicted order of finish along with the preseason teams will also be announced during media day. Additionally, players, coaches, and invited guests will have an interactive experience after the event with a self-guided tour of the Hall.

“We are pleased to announce the return of the SIAC Football Media Day to the College Football Hall of Fame to kick off the 2019 college football season,” remarked SIAC Commissioner Greg Moore. “In light of the rich history which spans more than 100 years, I cannot think of a more appropriate place to hold this year’s event.”