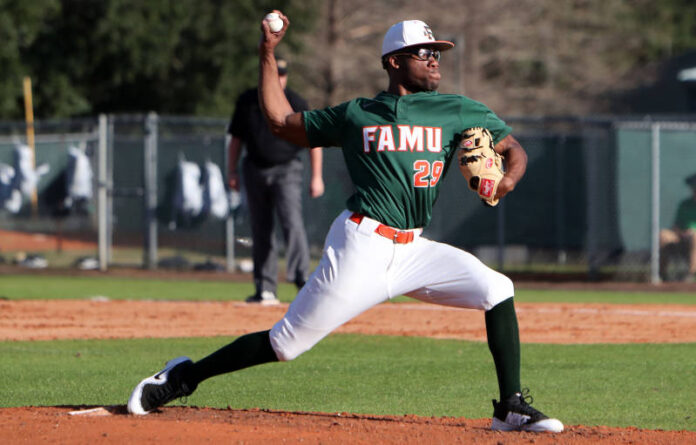 ATLANTA, Ga. — Florida A&M (27-34) outhit the Chanticleers 13-11, but it wasn’t enough, as it fell to Coastal Carolina (36-25-1) by a final score of 9-4 in front of 1,947 fans at Russ Chandler Stadium. The Rattlers four runs scored and 13 hits were the most in program history in an NCAA Regional game. Just like game one of the Regional, FAMU was within three runs heading to the seventh inning, but a couple of late runs by the Chanticleers put the game out of reach.

The Rattler offense was led by Seyjuan Lawrence and Brett Maxwell, who each had three hits on the day. Lawrence was 3-for-4 with a run scored, while Maxwell was 3-for-4 with an RBI. Octavian Moyer (2-for-5, RBI), Tucker Rayburn (2-for-4, RBI) and Willis McDaniel (2-for-5, HR, 2 runs, RBI) each recorded multi-hit performances for Florida A&M.

Coastal Carolina got on the board first with three runs in the top of the third inning. Cameron Pearcey doubled to left-center field, but a misplayed ball by McDaniel allowed Pearcey to advance to third base. Pearcey later scored on an RBI single from Cory Wood for the first run of the game. Wood would later score the second run of the inning, from third, on a sacrifice fly from Kyle Skeels. Jake Wright, who had reached on a walk earlier in the inning, came home on a wild pitch that made the score 3-0.

Florida A&M had an early scoring opportunity in the home half of the third inning but would wind up stranding runners at second & third base. Rob Robinson had singled up the middle with one out and Moyer followed with a single to left. Rayburn advanced the runners with a groundout to first base, but a fly out to left field from Jared Weber ended the scoring threat for FAMU.

In the bottom of the fourth inning, McDaniel put the Rattlers on the board with his third home run of the season, a leadoff homer over the fence in left-center field, to make the score 3-1.

The Chanticleers answered back with three runs on two hits in the top of the fifth inning to make the score 6-1. Wood led off with a walk and moved to second on a single from Kieton Rivers. Both runners advanced a base on a sacrifice bunt from Jake Wright. With one out, a hit-by-pitch to Zach Biermann loaded the bases before a sacrifice fly to center field plated Wood from third. After Parker Chavers drew a walk to reload the bases, Jamie Grant came in to pitch for the Rattlers and gave up an RBI single to Scott McKeon to score Rivers from third. The third run of the inning was scored on a bases-loaded walk.

For Coastal in the sixth inning, Jake Wright hit his 11th home run of the season, off FAMU reliever Jamie Grant, to push its lead to 7-1.

Florida A&M cut the lead to 7-4 with three runs in the bottom of the sixth inning. McDaniel led off the inning with a single to center and Lawrence followed with a single through the left side to place runners at first and second with no outs. After a pitching change by the Chanticleers, Kaycee Reese drew a walk that loaded the bases. Maxwell then brought home McDaniel with an RBI single that just dropped in down the right field line. With the bases still loaded and one out, Lawrence came home to score the second run of the inning on a sacrifice fly to right field by Robinson. Moyer followed with an RBI single, up the middle, to bring to plate Reese from second base in what proved to be the final run of the game for FAMU.

Coastal Carolina tacked on single runs in the seventh and eighth innings for the final score of 9-4. Another home run, this time from Chavers in the seventh inning, his 15th of the season, pushed the lead to four runs at 8-4. Following in the eighth inning, an RBI single from Biermann plated Wood from second base for the last run of the game.