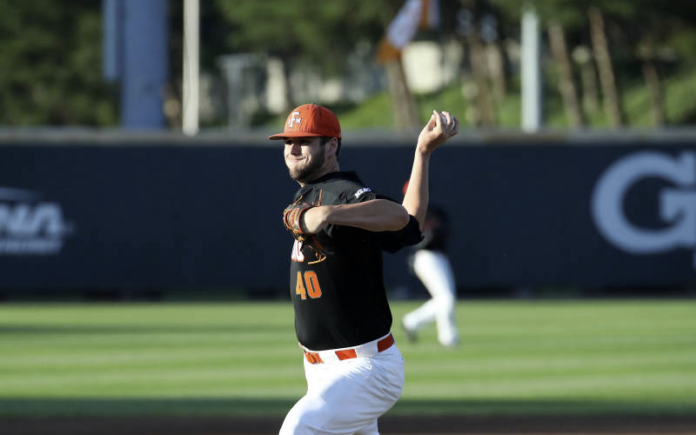 ATLANTA, Ga. – Florida A&M (27-33) fell to #3 Georgia Tech (42-17) by a score of 13-2 in front of a sold out crowd at Russ Chandler Stadium. Early miscues contributed to giving the Yellow Jackets a 5-2 lead after the first three innings as the Rattlers recorded three errors and walked five Yellow Jacket batters in those innings. Once FAMU settled in, GT was held scoreless over the middle three innings as the score remained 5-2 heading into the bottom of the seventh inning. The Jackets then scored eight runs in the seventh and eighth innings to put the game out of reach.


FAMU starting pitcher Kyle Coleman (6-6) suffered the loss after allowing five runs on nine hits with seven walks and four strikeouts in 5.2 innings. The seven walks were a season high.

The Jackets scored first with a pair of runs in the bottom of the first inning for an early 2-0 lead. Luke Waddell and Michael Guldberg led off the inning with back-to-back walks. Both runners would later score after FAMU right fielder Jared Weber misplayed a single to right from Kyle McCann. On the play, McCann tripped and stumbled rounding second base and was tagged out on the play.

Georgia Tech doubled the score to 4-0 with two more runs in the bottom of the second inning. GT opened the inning with back-to-back walks to Jackson Webb and Nick Wilhite. Webb would come around to score on an errant throw home by Octavien Moyer and a sacrifice fly to left field later plated Tristin English for the second run of the inning.

GT scored a single run in the third inning to increase its lead to 5-0. Colin Hall started the home half of the inning with a single up the middle. Hall then moved to third on a single up the middle from Austin Wilhite. With runners now on the corners and one out, Hall came home to score on a sacrifice fly to center field by Nick Wilhite.

Florida A&M would cut the lead to 5-2 with two runs in the top of the fifth inning. Willis McDaniel was hit-by-pitch and then advanced to third on a single to left from Lawrence. Lawrence was able to take second on the throw. With no outs, Kaycee Reese drew a walk to load the bases as the Rattlers were threatening. A sacrifice fly to center field from Maxwell plated McDaniel for the Rattlers first run of the game, Lawrence was also able to advance to third on the play. A bunt single from Coscarella would bring home Lawrence from third in what proved to be the final run of the game for Florida A&M. FAMU still had the bases loaded still, but a strikeout by Tucker Rayburn ended the threat by the Rattlers.

Still trailing by just a score of 5-2, FAMU led off the sixth and seventh innings with doubles but were unable to plate any runs.

The Yellow Jackets put the game out reach with five runs in the seventh inning and three more runs in the eighth inning for the final score of 13-2.

The Rattlers will next face Coastal Carolina (35-25-1) in an elimination game on Saturday at 1:00 PM ET. FAMU will be the home team.