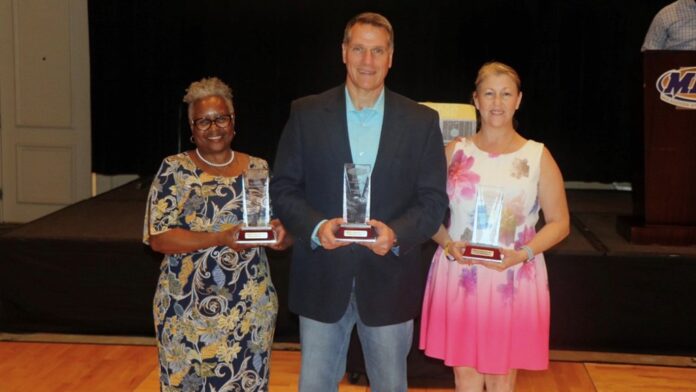 The All-Sports Award are indicators of the overall strengths of the conference’s men’s and women’s athletic programs. North Carolina A&T State was presented with a pair of $20,000 checks during a reception at the Westin Hilton Head Island Resort & Spa in Hilton Head, S.C. on Wednesday evening.

In addition, North Carolina A&T State was honored academically, posting the MEAC’s highest academic performance rate (APR) over the past four academic years. For its efforts, the NCAT Department of Athletics received a $10,000 check.

Howard University was recognized during the reception as the 2019 recipient of the MEAC Highest Graduation Success Rate (GSR). In addition to the recognition, Howard was presented a check for $25,000 from the conference. The Bison’s 81-percent GSR is the highest among MEAC institutions spanning the 2008-11 cohorts.

The Aggies claimed their second straight women’s all-sports award with 94.5 points, highlighted by conference championships in indoor track & field and outdoor track & field, as well as the regular-season title in women’s basketball and a runner-up finish in bowling.

On the men’s side, North Carolina A&T State racked up 101 points in taking its first all-sports trophy since 1996 (and its third overall). The Aggies won MEAC titles in football, cross country, indoor track & field and outdoor track & field, as well as a regular-season title in baseball. In addition, the Aggies were runners-up in the men’s basketball regular season.

Bethune-Cookman, with 88.5 points, came in second in the men’s team standings. Norfolk State (76.5) was third, followed by North Carolina Central (67.5).

This marked the first time since 2015-16 where one school swept both all-sports awards; that year, Bethune-Cookman accomplished the feat in taking the Talmadge Layman Hill Award and splitting the Mary McLeod Bethune Award with Florida A&M.