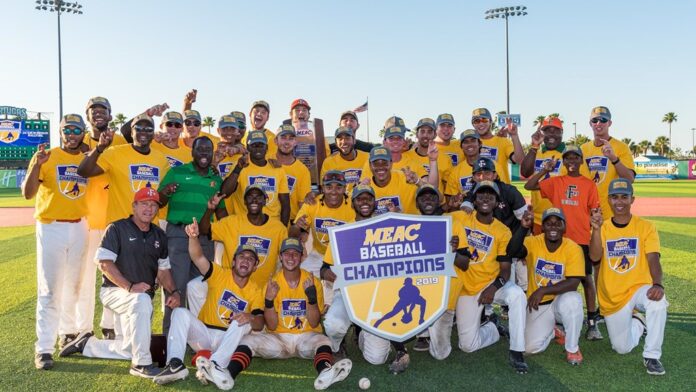 Five runs down in one elimination game, and down to the final pitch in another, the Rattlers somehow, someway went from to surviving to thriving as they downed Norfolk State 5-4 and 8-1 to win their eighth conference championship overall (and first since 2015) at Jackie Robinson Ballpark.


The Rattlers (27-32) will learn their NCAA Regional destination and opponent next week (the Selection Show will air on ESPNU on Monday, May 27 as 12 p.m.).

Brett Maxwell’s two-out, two-run single in the ninth gave the first game to the Rattlers, who found themselves down 4-2 after Norfolk State launched back-to-back home runs in the seventh.

In the second game, Florida A&M capitalized on three Spartans errors to put six runs on the board, seizing complete control after being one strike away from going home.

Even Florida A&M head coach Jamey Shouppe thought his team’s four-game run through the elimination bracket was “an all-timer.” But it fit in with what he preached to a team that started 0-6 and went through a seven-game skid midway through the season.

“Some teams sit back and enjoy success, others work harder,” Shouppe said. “We kept practicing, kept working even though there wasn’t much success.

“Down 6-1 to Delaware State [Florida A&M would win 9-8 in 10 innings to start the run], we were starting to point fingers and fuss,” Shouppe said. “We got together and said if we go out, we go out together.”

Shouppe got two complete games from Kyle Coleman in the tournament, the second in the championship game on just two days’ rest. He scattered six hits, walked one and struck out nine while keeping the Spartans off-balance after they registered their lone run in the first inning.

“Unbelievable,” Shouppe said of Coleman. “He had life in his arm, his pitches were well-located.”

Coleman smiled when asked if he could continue throwing on just two days’ rest. Of course.

“If it works, don’t change it,” Coleman said. “[Anything else] wasn’t an option after we came this far. Everyone fought.”

Norfolk State was in prime position to take its first ever title in the first game, breaking a 2-2 tie in the bottom of the seventh after Alsander Womack and Caleb Ward went back-to-back over the wall in left field. That put the Spartans up 4-2, but the Rattlers answered with one in the top of the eighth to cut the lead to 4-3.

Outstanding Performer honors went to Kaycee Reese, who batted .455 with six runs scored and six RBIs in the tournament. The senior was that batter for FAMU with two strikes and two outs the ninth inning of Saturday’s first game.

He kept alive, fouling off four pitches before drawing the walk to keep the inning going. Maxwell followed with his game-winner.

“I was comfortable and relaxed. You have to stay loose,” Reese said. “If you would asked me if we would win the tournament when we were down five runs to Delaware, I would have said `it would be tough, but I know we’re going to fight.’”