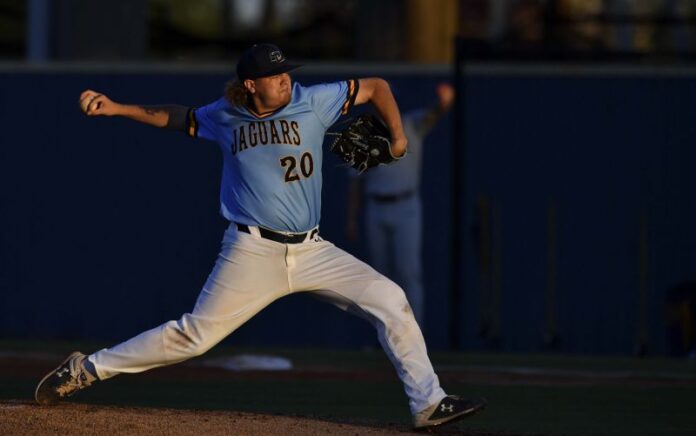 Southern University pitcher Eli Finney became only the third pitcher in program history to notch a career victory over intra-city neighbor LSU after leading the Jaguars to a 7-2 home win Tuesday night at Lee-Hines Field.

The win, which aired on ESPN’s streaming platform ESPN Plus, is Southern’s third victory in 56 tries but serves as the program’s first home win of the series with the Tigers from South Baton Rouge. Southern’s last win over LSU came in 2005 at Alex Box Stadium.

“I told our guys, ‘Let’s put ourselves in a position where we feel like these are game we suppose to win,” said head coach Kerrick Jackson, who has resurrected the Southern (18-15) baseball program in his second season at the helm. “Let’s celebrate the championships, let’s celebrate those types of wins and put ourselves in the mindset that these are expectations for us.”

Aided by a four-run first inning and a 5-0 lead after two innings, Finney (2-2) pitched a 7-inning masterpiece, leaving baffled LSU (23-11) batters in his wake and drawing a standing ovation from the Jaguar faithful when he exited in the seventh. Finney, who had a no-hitter through six innings, allowed only one earned run and one hit while striking out seven Tiger hitters.

“[Tonight’s game] was very exciting, but I want to just thank my teammates for getting the four-run lead to start,” said Finney, who is in his first season with Southern after transferring from Indian River Community College.

After allowing one baserunner in each of the first three innings, Finney retired LSU’s next ten batters in orders before walking Cade Beloso and yielding the no-hitter on CJ Willis double down the right-field line. LSU managed to add one run on Brandt Broussard’s sacrifice fly but Finney punctuated his epic night, forcing Giovanni DiGiacomo to ground out to end the seventh inning.

As the team had done all night, Southern provided Finney additional run support in the bottom half of the seventh. Javeyan Williams singled to right field and Tyler LaPorte laid down a bunt single to setup Ashanti Wheatley’s 2-RBI single to extend Southern’s lead to 7-1.

Whilhelm Allen entered to shutout the Tigers in the eighth and Connor Whalen reprised his role as the Jaguars closer in the ninth to allow one run and pick up the final two outs of the game, which sent the Southern faithful in attendance into a frenzy.

“The [Southern] fans were amazing tonight,” Finney added. “I was on and all three pitches were working.”

Tyler LaPorte and Willie Ward finished with multiple hits in Southern’s win Tuesday. LaPorte went 3 of 5 at the plate with an RBI and two runs scored. Ward recorded a 2 for 4 night at the plate and finished as one of three Jaguars who tallied two RBIs. The Jaguar hitters applied constant pressure on LSU’s pitching staff all night, registering 10 hits and forcing the Tigers to use seven pitchers in total.

“There’s not much to say from our standpoint,” head coach Paul Mainieri said. “We were beaten by a team that played a lot better than we did, that was a lot hungrier than we were. Their pitcher totally handcuffed us, and their hitters were very tough outs for us tonight. They deserved to win and completely outplayed us.”

Landon Marceaux (1-2) sustained the loss after struggling out of the gate and lasting only one and 2/3 innings.

LaPorte opened the game with a leadoff single then Marceaux walked Johnny Johnson and Ashanti Wheatley. Coby Taylor’s one-out 2-RBI double provided the Jaguars with an early 2-0 lead. In the Jaguars next at bat, Willie Ward cleared the bases with a 2-RBI single to give SU a commanding 4-0 lead. Southern added a run in the second inning when LaPorte grounded out to Josh Smith at shortstop to Hampton Hudson, who led the inning off with a single through the right side of the Tigers’ infield.

Southern will attempt to put this historic win on the back-burner in less than 24 hours when they host New Orleans Wednesday night at Lee-Hines Field at 6 p.m.