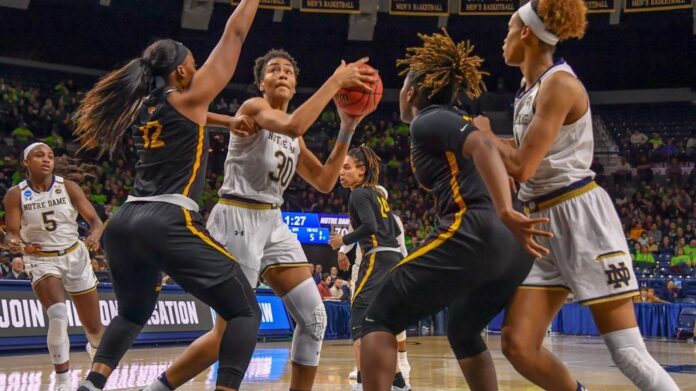 SOUTH BEND, Ind. — Bethune-Cookman’s first trip to the NCAA Women’s Basketball Tournament ended with a 92-50 loss to defending National Champion Notre Dame, a life-defining experience to cap off an incredulous run and one more 20-point outburst from Angel Golden.

The senior from Tampa scored a game-high 25 points, but the Fighting Irish’s height, depth and just about everything else sent Notre Dame to the second round, where it will host Michigan State Monday evening.

Notre Dame’s inside presence limited BCU to 14 points inside the paint. The Lady Wildcats finished with more three-pointers — a season-high nine — than two-point shots (seven).

Golden had five of those three-pointers as she posted her 30th career 20-point night. BCU had won all but one of the previous 29 games before this.

All nine Lady Wildcats scored in their NCAA tournament debut.

Making her final appearance, senior Chasimmie Brown had six rebounds and made both free throws. Graduate student Kendall Fincher, playing in her home state, also was 2-2 from the line.

BCU won its first Mid-Eastern Athletic Conference tournament championship since 1984 with a line-up depleted by five players needing surgery. The Lady Wildcats regrouped to win 12 of their final 14 to win last week’s conference title and a first-ever NCAA appearance.